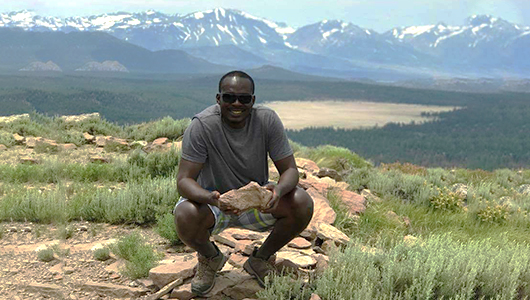 Washington State University junior Lambert Ngenzi wants to use what he is learning about geospatial analysis to help farmers in rural Africa conserve and manage vital water resources.

“Where I come from, water is a big issue,” Ngenzi said. “If I could do something in any way, if I could help the people back home, I would love to do it.”

Ngenzi, a McNair Undergraduate Research Fellow with plans to pursue a Ph.D. in environmental science, spoke only a few words of English when he arrived in Washington state in 2013.

His family fled the 1994 Rwandan genocide and lived as refugees in the Republic of Congo for almost two decades before moving to the United States.

Upon arriving in Kent, Wash., Ngenzi, an 18-year-old native French speaker and a recent high school graduate, found out he would have to go back to high school for two years while he learned to speak English. 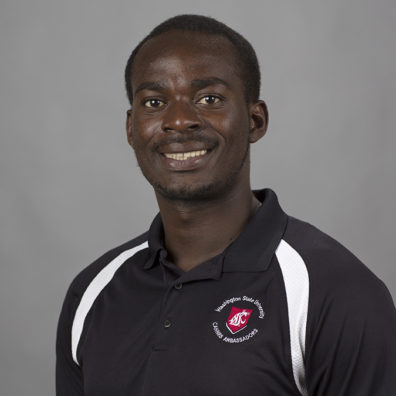 “I had to learn the language and get used to living in the United States,” Ngenzi said. “It took a lot of patience but I’ve been getting better every year.”

During his first summer in Kent, Ngenzi was at the library when he ran into a friend from his high school soccer team who mentioned an internship opportunity with the King County Department of Natural Resources.

“My friend told me I should apply for this paid summer internship working with King County environmental scientists,” Ngenzi said. “I decided to do it and I absolutely loved it. We visited a water treatment plant, I learned a lot about water issues and I love working outside. When I graduated from Kent Meridian High School in spring 2015, I thought maybe I should pursue a degree in environmental science because I knew water was such a big issue back home and I wanted to help.”

Ngenzi began his studies at WSU in the fall of 2015. His undergraduate academic advisor connected him with Alex Fremier, an associate professor of environmental sciences, who specializes in river ecosystem dynamics.

For the past year, Ngenzi has worked in Fremier’s laboratory on an international project researching how land use patterns in Ghana and Burkina Faso are affecting sediment accumulation in vital water reservoirs.

Fremier tasked Ngenzi with examining Landsat satellite images of water reservoirs in the two West African countries over the last 45 years to find out which reservoirs were shrinking due to the buildup of sediment.

Ngenzi’s detailed work helped Fremier and his international team of collaborators determine how much water storage was being lost from the reservoirs each year. The researchers then used the data they gathered to help local inhabitants devise simple methods for reducing sedimentation in the reservoirs.

“Lambert is one of those rare students who knows what he wants to do and he has worked hard to develop the skill set to do it,” Fremier said. “He has been an invaluable resource in my lab. Being a mentor to students like him is the most rewarding part of my job.”

Ngenzi is currently taking classes in geographic information systems in addition to working in Fremier’s laboratory. He is also a French tutor and a peer mentor for the WSU Office of Undergraduate Research.

“It has been really rewarding sharing what I’ve learned about how to be successful,” Ngenzi said. “I feel so fortunate and I want other students with backgrounds like mine to have the same opportunities I have had.”

In September, Ngenzi ran a workshop entitled “Diversity, Equity & Inclusion in Conservation & the Outdoors” at the Uplift Climate Conference in Moab, Utah. The Doris Duke Conservation Scholars Program at the University of California, Santa Cruz, sponsored him for the trip.

He said the experience helped him hone his English presentation skills and make connections with top water resource scientists.

“Undergraduate research at WSU has opened so many doors for me and helped me make a lot of great connections as I start applying for graduate school,” Ngenzi said. “You don’t have to know everything when you get started, you just have to bring your passion and be open-minded and willing to learn.”

Increasing the percentage of undergraduates involved in research, scholarship and creative discovery is one of 11 metrics WSU is using to measure its progress towards achieving recognition as one of the top 25 U.S. public research universities. According to the 2017 National Survey of Student Engagement, twenty-five percent of WSU seniors report having done research with a faculty member/mentor.

Photo at top: Ngenzi in the California White Mountains during the Doris Duke Conservation Scholar program.