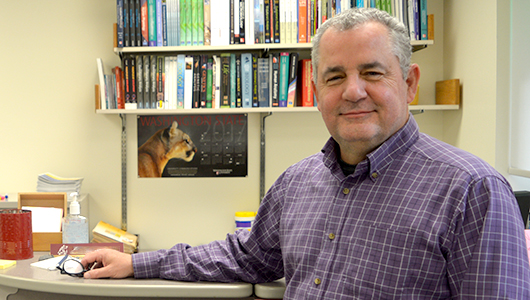 Patrick Carter, an expert in evolutionary physiology, has been named director of the School of Biological Sciences at Washington State University.

A WSU faculty member since 1996, Carter began serving as interim director for SBS in June and officially began his tenure as director on Oct. 1.

“My main priorities as director will be improving the educational experience for our students and helping to create and maintain an environment conducive to faculty conducting their research,” Carter said.

He will lead efforts to grow the school’s undergraduate degree programs, which include popular pre-med and pre-vet options, and to enhance non-major courses in general biology and zoology. SBS faculty teach the second highest undergraduate credit-hour load at WSU and students can earn degrees at three WSU campuses: Pullman, Vancouver, and Tri-Cities.

Carter also hopes to continue building upon the school’s successful track record of landing major research grants and external funding. From 2014 to 2016, SBS annual grant expenditures increased from $2.5 to $4.2 million.

“I want to help faculty improve the outreach and educational components of our research,” Carter said. “Most grant proposals to federal agencies require a “broader impact” component where the researchers need to demonstrate how they will communicate or educate the public on the benefits of their work. We can be more effective as researchers and educators by developing coordinated broader impact efforts among research groups within SBS.”

Carter began his career in higher education studying evolutionary genetics at the University of Colorado, Boulder. Today, his work involves examining how variables like temperature and food supply affect the evolution of physiological traits in insects and fish, and working with statisticians to develop methods to study the evolution of biological traits.

“Right now, my research group is looking into the effects of temperature on growth and swimming performance of rainbow trout,” Carter said. “Our work could eventually help develop selection protocols to produce rainbow trout that can be farmed more effectively at warmer temperatures.”

“Teaching is something I simply love to do,” Carter said. “Seeing the light bulb go off over their heads when a difficult concept clicks is a form of instant gratification that you just can’t get anywhere else.”

Carter succeeds SBS professor Larry Hufford, who is now the associate dean of faculty and academic affairs for the College of Arts and Sciences.