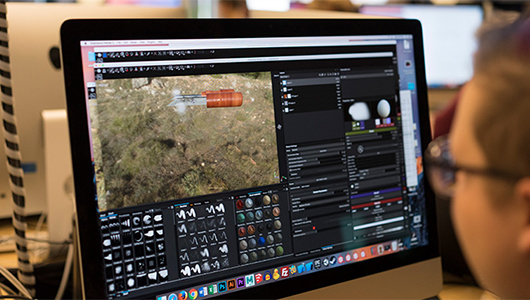 Working in partnership with a local nonprofit organization, WSU Creative Media and Digital Culture students are developing an augmented reality app to tell the story of a historic local boarding school and orphanage.

The app will showcase Providence Academy in the 1870s, including founder Mother Joseph, the nuns who worked there, and students who attended the school. Smartphone users will be able to scan codes with their camera in designated locations to experience different augmented realities.

Dene Grigar, the director of CMDC, is overseeing the app’s development. The project is partnered with The Historic Trust, a nonprofit organization in Vancouver Washington who according to their website, has a mission to inspire civic pride and economic vitality through education, preservation, and celebration of our community’s history.”

One of Grigar’s goals is to support WSU’s “Land Grant Institution.” A Land Grant institution is when an institution pursues the goal of giving students an outlet to apply their skills.

The workshop is very different than a traditional college class — it is more like a workplace. It is loud and busy yet focused. There were many students exchanging ideas on different things to do with the website for the app and the interface for the app, while others were concerned with the graphic and sound design. Students are given the opportunity to

demonstrate their skills using Maya, Substance Painter, Zbrush, Photoshop and Adobe Illustrator. Another team actually hand codes the company website using Html5, CCS3, and Javascript. This kind of classroom may seem eccentric, however Grigar said that after college the students that have been involved in the past are accredited with a 90 percent job placement rate.

Connor Goglin, the workshop’s virtual reality and augmented reality coordinator demonstrated the interesting aspects of the app. For example, the tracking of the different objects that will be placed into the user’s reality is very precise. When displaying the different objects, Goglin mentioned that he could walk to the other room and the marker that he placed to indicate where the object would appear, would stay in place. One of the things that the user will be able to experience is the ringing of a bell. There is a 200 pound bell that people used to use during the mid and late 1800’s, that the program has recreated. The user will be able to actually ring the bell with their smart device by either swiping or waving their device at the virtual object.

The Creative Media and Digital Culture Program has created virtual reality programs in the past. Last year they created a simulation of the Kaegi Pharmacy, where the user plays from the point of view of a pharmacist from 1927 to 1987. It runs through the HTC Vive and allows the user to crush pills, and pour them into different instruments, imitating the creation of medicine. The user is also able to tour the pharmacy and see which tools and resources were available to pharmacists at the time it ran. The new app will be accessible to anyone and will function on most modern smartphones.

The app is going to have ten episodes and the program plans on making two episodes a week. Grigar said the app plans to be finished, and on the app store Dec. 6. However, the Creative media and Digital Culture program will not end there. According to Grigar, next semester the program will be working with The Historic Trust again to create similar augmented reality apps about heroes who have benefited the Northwest.

Top photo: WSU students are using a variety of programs to create the app. Photo courtesy of Zeke Estes.

By Ronnie Yaacoub for The VanCougar