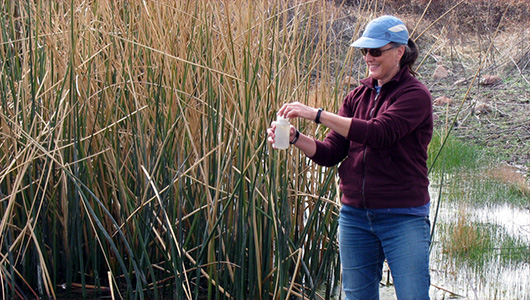 WSU researchers Caren Goldberg, Katherine Strickler, and Alex Fremier are being honored this week for their use of a technique that can detect minute amounts of DNA to see if at-risk species are in an area.

The researchers took the Project of the Year for Resource Conservation and Resiliency award during the Strategic Environmental Research and Development Program and Environmental Security Technology Certification Program Symposium. The conference, which runs from Nov. 28 through Nov. 30 in Washington, D.C., focuses on top Department of Defense (DoD) environmental and energy issues. Goldberg is an assistant professor in the School of the Environment. Strickler is a research associate and Fremier is an associate professor in the school.

The title of their presentation is “Environmental DNA as a Tool for Inventory and Monitoring of Aquatic Vertebrates.” Kurt Preston, manager of the two programs, said the project “exemplifies the environmental science required to understand the environment in such a way as to enhance DoD’s effectiveness in both protecting the environment and providing a robust training environment over the long term.”

Department of Defense lands are home to dozens of threatened or endangered amphibian and fish species, “creating potential constraints on readiness training and resources management,” according to a summary of the project. To detect different amphibians and fish, researchers typically rely on dip nets, seining, stunning fish with electricity, and audio and visual surveys. For all the time and expense the techniques consume, they tend to count low and even underestimated numbers.

Environmental DNA, or eDNA, looks for the genetic material of target species in samples of water where they might be. The team looked for the DNA of species of concern as well as invasive species in three DoD installations: Fort Huachuca in Arizona, Eglin Air Force Base in Florida, and the Yakima Training Center. Compared to field surveys, the eDNA sampling generally had a higher probability of detecting species.

Top photo: Katherine Strickler, a research associate in the School of the Environment, samples water in a search for minute amounts of DNA that could signal the presence of at-risk species.