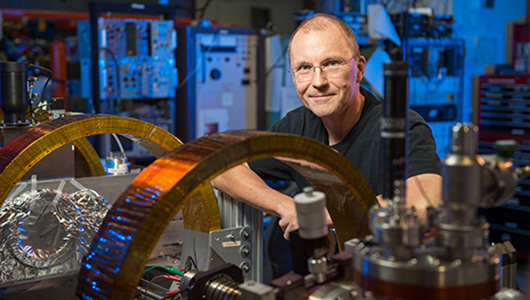 PULLMAN, Wash. – A group of WSU researchers has discovered a way to modify diamonds that opens up important applications in the field of quantum computing and in radiation detection.

Kelvin Lynn, professor of physics and of mechanical and materials engineering, and his team were using very thin strips of diamond inside a particle accelerator when they made an intriguing scientific discovery — by accident.

As the researchers bombarded the diamond strips with deuterons, or tiny pairs of protons and neutrons, they observed a bluish light coming from the diamond and soon determined that it was nitrogen gas leaking out of the diamond. It was the first time that nitrogen has been removed from a diamond at such relatively low temperatures. If the deuteron process were to continue, a diamond would eventually decay back to a stable carbon isotope.

“The tag line is that a diamond is forever, but actually it transforms when hit with deuterons,” said Marc Weber, a research professor and physicist at WSU’s Center for Materials Research.

The paper on the research titled, “Nitrogen Desorption and Positron Sensitive Defect of CVD Diamond,” has been published in Journal of Modern Physics.

The work opens up the possibility of using diamonds as quantum mechanical switches, which are a fundamental building block of quantum computers, said Lynn, director of the Center for Materials Research at WSU.

The researchers also concluded that they had created a di-vacancy, or a pair of defects caused by absence of atoms, in the diamond. The properties of the defect changed when exposing the diamond to a positron beam.

Although diamonds are already used in radiation detection, the newly discovered properties of the defect could vastly improve them, said Lynn.

Funded by the U.S. military, the researchers had been using the diamond strips to create positrons, which are a type of antimatter. Every subatomic particle like the proton, neutron and the electron has a corresponding antiparticle. The positron is the antiparticle of the electron. When a positron collides with an electron, both are annihilated while releasing lots of energy.

“We wanted to do a straightforward thing,” said Kasey Lund, a former Ph.D. student at WSU and now a beam physicist at the National Superconducting Cyclotron Lab in Michigan, “but we were distracted by something shiny.”

The team could have ignored what it thought to be “garbage data,” but chose to look into it, he said.

WSU is exploring ways to commercialize the patented process and technology, Lynn said.

By Siddharth Vodnala, Voiland College of Engineering and Architecture, for WSU News >>