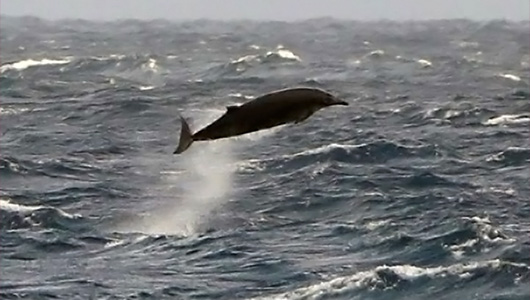 A researcher at WSU Vancouver encountered rare and elusive beaked whales while on a research vessel west of Ireland last month.

Enrico Pirotta, a post doc in the Department of Mathematics and Statistics, was on the last days of a six-day cruise when the crew had several sightings. The first sightings were too far away for positive identifications, but on the final day the crew saw four separate groups of breaching whales, according to an online log of the Ireland-based Marine Institute in Galway.

Little is known about beaked whales as they spend up to an hour at a time diving to depths of up to 8,000 feet. Pirotta was part of a team trying to characterize the whales’ habitat.

“We were monitoring the waters of the Irish shelf edge using a towed hydrophone to record the vocalizations of deep diving cetaceans, with particular focus on beaked whales,” said Pirotta, who works in the statistical ecology lab of Leslie New. “I also took part in plankton sampling and mesopelagic trawls, aiming to characterize the food resources in their habitat.”

“The amazing thing about this encounter was the high number of sightings in such a small and specific area,” Chief Scientist Patricia Breen said in a Marine Institute news release. “Less than 30 kilometers separated the first and last sightings. This highlights an area that, whilst small, is potentially of huge importance to beaked whales in Irish waters.”

The survey was a collaboration between the National University of Ireland Galway, University College Cork, the Marine Institute, the Centre for Marine and Renewable Energy, Marine Conservation Research and WSU.