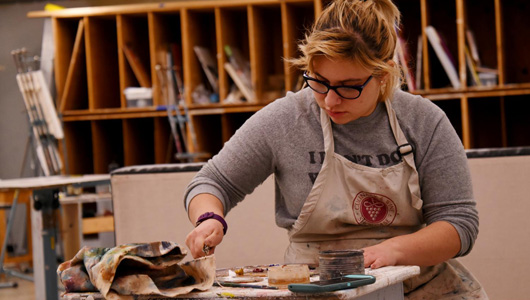 Senior fine arts major Victoria De Leon meanders through campus from Stevens Hall to Southside Café. She builds her own soup in the dining hall and proceeds to a table in the back near the windows.

From her backpack, she removes a black sketchbook that is falling apart at the spine. She sifts through the pages, displaying miscellaneous words and sewn-in textiles.

“It’s a lot more taking notes than drawing because I feel like with certain words,” she says, “it triggers different images in my head.

De Leon is a classically trained painter from Chicago, Illinois, who also specializes in soft sculpture and has found a love for textiles.

She was accepted into the first graduating class of the Chicago High School for the Arts at age 14. During her four years at “ChiArts,” her teachers prepared to send her off to a prestigious all-arts college.

Instead, she chose to follow her brother to Pullman and pursue her bachelor of fine arts at WSU.

“I feel like you’re not torn down as much,” she says of her decision to turn away Columbia College Chicago. “It’s too competitive for me.”

She opens her laptop and begins to research zeitgeist, something she defines as concepts that may become a reality in the future, for a Fashion Forecasting assignment.

She quickly gets side-tracked by her own interests: new development in materials, not only clothing, but painting materials as well. She pulls up articles about Jessica Stockholder, a Seattle-based sculptor, and gushes over her work with assemblage, the practice of making art from unrelated objects.

“Fibers have a huge influence on identity and how people express themselves,” she says, “or how they choose to express their wealth or their modesty.”

She reflects on her first painting class at WSU and the crazy professor who affirmed her decision to leave the city. As time goes on, the artists get crazier and the concepts get broader, she explains.

“Having such a unique fine arts department,” she says, “I feel like we stand out a little bit more.”

Associate professor of fine arts Io Palmer stands under a spotlight at Etsi Bravo, holding a microphone. She introduces the 10th and final performer of the evening.

De Leon appears at the corner of the stage. Surrounded by silence and sheer fabrics, she prepares to perform for her Performance and Materials class. She pays tribute, without speaking, to her mother’s photography.

“Most of the pieces I have created are flat,” she says, “but having the performance class really helped me embody my art piece into me.”

She says performance has helped her gain courage to discuss her artwork, emphasizing the importance of being able to represent herself as an artist.

“I’ve just been so impressed with her honesty in my class and her fearlessness to get up in front of people and perform, to talk about things that are maybe a little bit difficult to talk about,” Palmer says of De Leon, “and I’ve seen her grow in that way.”

With dreams of becoming a museum curator, De Leon has worked at the Museum of Art for the past three years. Her experience and portfolio gave her the opportunity to be director of the CUB Gallery through the Student Entertainment Board. She says this was her most formative professional experience on campus.

“It was kind of the milestone,” Museum of Art curator Zach Mazur says. “She had the opportunity to take the work that she did for the museum and assume a leadership role by implementing that work at the CUB Gallery.”

Although she’s scored her dream job on campus, De Leon recognizes that she has to go to graduate school to achieve her future plans. Following graduation in the spring, she plans to take a semester off to refine her portfolio.

As she repairs and refines her soft hexagonal sculpture titled “Picasso Hierarchy” in the woodshop, she explains she enjoys working with faculty who know what they’re doing.

“It’s also really nice to have professors who are experienced in how to use it so you don’t necessarily ruin your own fingers or chop off your own hand by accident,” she says.

“Picasso Hierarchy” fell off the wall of De Leon’s dorm after its glue melted, so she is properly repairing it to use in her portfolio.

“Learning how to take care of your pieces, that’s new to me,” she explains. “If you really do care about your pieces, you’ll learn how to make it durable and make it withstand the s— that it goes through.”

Entering Zach Mazur’s office on the top floor of the Fine Arts building, two museum interns sit at a table listening to music and working on their final projects. Mazur is the curator of education and collections for WSU’s Museum of Art, and he teaches Fine Arts 490, Gallery Procedures. He explains that he has acted as a mentor for De Leon throughout her time in the department.

De Leon explains that she is not scared of what will happen after graduation because of her experience working in and around museums. She knows her potential and where she wants to end up.

“I felt like that was a good segue into me applying for future museum jobs,” she says. “I have been working in a museum for about four years now. I know what I’m doing.”

Mazur offers similar advice, warning prospective art majors to narrow down what kind of artist they want to be in order to prevent disappointment with a selected program. He encourages students to get involved at the museum in the same ways De Leon has.

He says there’s a common misconception that there are no art jobs out there. De Leon argues that being successful in the art world is a matter of networking and learning to talk about your work.

“It’s not one of those careers where you can just drop yourself into a mold, it’s very individualistic,” Mazur says.

He explains that the current climate in WSU Fine Arts is very conceptually-based in order to teach art students how to be socially aware. He says art students are cultivating skills that make them marketable to future employers.

“Art students are expert communicators,” he says. “They are trained to use every single one of their senses to investigate the world around them and find meaning behind what they experience.”

He says art and design exist everywhere and the job market needs people who can see the world differently.

“A common misconception is that art students are crazy,” De Leon says. “Everyone else is crazy because they can’t see the world in multiple versions of colors. It’s not our fault that we can see the world from a different point of view.”

Mazur says that professors teach what they know best, and aspiring art students need to make sure they know what their intentions are and what kind of artist they want to be.

As De Leon puts the finishing touches on her final project for her Advanced Painting class Wednesday in Fine Arts, Room 7016, she contemplates the artist she plans to become.

“I am an artist that wants to sew a story together and create a photo album with all these images,” De Leon says, “so I can then tell my kids one day.”

By Gabriella Ramos for The Daily Evergreen