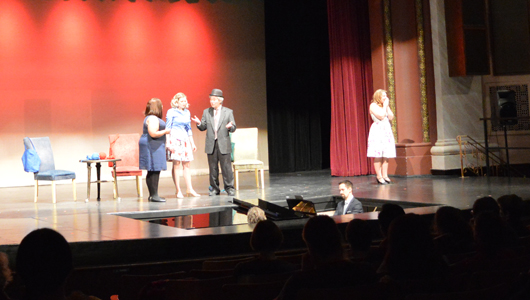 This fall, students filled Bryan Hall Theatre with song, performing two one-act comic operas, each with an abiding moral to the story.

In A Game of Chance, three young women sing longingly about their hopes and dreams: one wants to be wealthy, one wants to be famous, and one wants a lover in her life. Soon, each is visited by the eternal messenger of Fate, who makes their dreams come true. Instead of happiness, however, they find regret.

The rich woman, played by Celena Hansen, misses real friends; the famous one, played by Clare Sullivan, yearns for love; and the young wife, played by Josephine Clark, finds marriage a tedious chore. Even the messenger, played by Daniel Jinguji, is dissatisfied with his life—he needs an assistant to help him with his tough job.

The second opera, Chanticleer, involved considerably more costuming, which included two pairs of chicken wings and feet. Based on a story in Chaucer’s Canterbury Tales, the plot revolves around a vain rooster (Bogdan “Theo” Mynka) who becomes entrapped by a flattering fox (Daniel Jinguji).

Along with the widow (Kiya Fife), who owns the farm where the action occurs, the rooster, his wife (Katie Berndt), and the fox learn some important life lessons.

The WSU Opera Workshop ensemble presents a production of operatic scenes and/or one-act operas on the WSU Pullman campus each fall and a musical theatre production each summer. For Mom’s Weekend in the spring, a full opera or musical theatre production is presented, accompanied by the WSU Symphony Orchestra. The 2018 performances are scheduled for Friday, April 6, at 8:00 p,m. and Saturday, April 7, at 2:00 p.m., both in the Bryan Hall Theatre.

Learn more about the program:

Top photo: Opera Workshop students perform a scene from A Game of Chance on the stage in Bryan Hall Theatre.