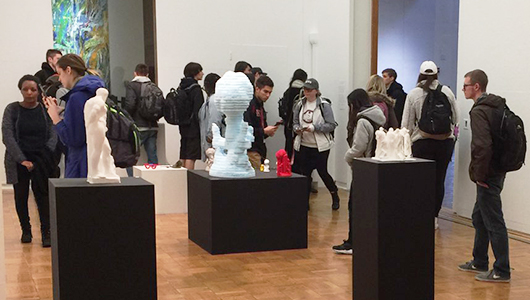 New sculptures by WSU fine arts students are mixed with miniature versions of iconic artworks in a free, public exhibit in Gallery 2 through 3:00 p.m. Friday, February 2.

Curated by Meredith and Kuhn, the exhibit features 3D prints of sculptures from antiquity that Meredith utilizes in her classes. It also features works created by Kuhn while teaching students the processes involved in 3D printing and several prints the students created while learning.

“The series of prints of ancient sculptures provide innovative and effective tools for teaching art history while also bringing versions of ancient art to WSU for many people to see,” Meredith said.

Some of the most recognizable of the historic prints are Myron’s “Discobolus” (“Discus-Thrower”), the Vatican’s “Laocoön,” and Michelangelo’s “David” and “Pietà.”

Limitations on printing size and material in the versions on display highlight issues of originality, medium, and scale, Meredith said. “Once printed, it becomes possible to create a myriad of forms by experimenting with scale, for example.”

The miniature versions also relate to the history of collecting, she said.

“Around the late nineteenth century, life-size reproductions of well-known sculptures were made using plaster casts. The few that survive remain useful as teaching collections. Such moments of reproduction used a new technology to contribute to the history of that object and our understanding of it. Today, 3D printing is doing that again in yet another iteration.”

The works Kuhn and his students created in virtual space reproduce everyday objects, such as shoes, eye glasses, figurines, and roadkill. Kinetic forms also underscore the utilitarian nature of the students’ work.

When printed in plastic, such diverse objects become still lives, Kuhn said. “As still lives, the functional is rendered non-functional. Viewers are challenged to consider which elements are fundamental to the original.”

Designed exclusively at a distance, using a computer, the design-centered focus calls attention to the intangibility of the process of construction and execution, Kuhn said.

Conceptual pairings of the organic with the inorganic also draw attention to the materiality of the 3D-printing process, he said.

“This show really exemplifies the innovative ways the Department of Fine Arts, in the College of Arts and Sciences, utilizes tools to examine and share perspectives on the world,” said Squeak Meisel, chair. “Making happens here.”

–By Adrian Aumen, College of Arts and Sciences

Top photo: Visitors take in the show in Gallery 2 (photo by Hallie Meredith)