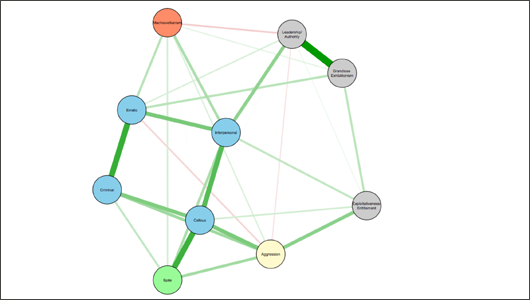 Dark personality traits such as narcissism, Machiavellianism, and psychopathy are socially aversive personality styles that are often confused because of their similarities.

Using a quantitative technique called network analysis, WSU psychologists David Marcus and Jonathan Preszler, along with their colleague Virgil Zeigler-Hill at Oakland University, are investigating the behaviors that make up the common core of dark personality traits.

The researchers found high levels of interpersonal manipulation and callousness were the two greatest indicators of people having psychopathic, narcissistic, Machiavellian, spiteful or aggressive tendencies. Their work was recently published in the Journal of Research in Personality.

“People who are both callous and interpersonally manipulative are especially toxic because they are good at getting others to do what they want and don’t care about the consequences for anyone but themselves,” Marcus said. “Such a combination may be especially destructive when someone ends up in a position of power and authority, like the head of a movie studio or a government.”

Network analysis of psychological data is a relatively new analytic method that visually depicts associations between symptomatic behaviors of personality and mental disorders.

“It gives us the ability to break down personality disorders by their symptoms and then plot those symptoms in a way that shows interconnectivity,” said Preszler, a graduate student researcher in psychology.

The surveys measured participants’ willingness to engage in certain behaviors like taking advantage of a coworker to get a promotion or stealing money from a family member.

The researchers found that interpersonal manipulation—the willingness to use others to get ahead—and callousness—not caring how one’s actions affect other people—were central components of all five of the dark personality traits analyzed.

Preszler is also working with WSU psychology professor Maureen Schmitter-Edgecombe and psychology graduate student Katie Caffrey on another project where the researchers are attempting to use network analysis to identify symptoms and behaviors that cause elderly patients cognitive difficulties or may precede significant events, such as a depressive episode.

“We have 20 to 30 patients who are using their cell phones to collect data on feelings of physical wellness, mental acuteness and other variables,” Preszler said. “We will then use network analysis to look at how these variables interact over time and hopefully be able to identify specific factors that contribute to or may predict the onset of depression, cognitive problems or other ailments in an individual patient.”