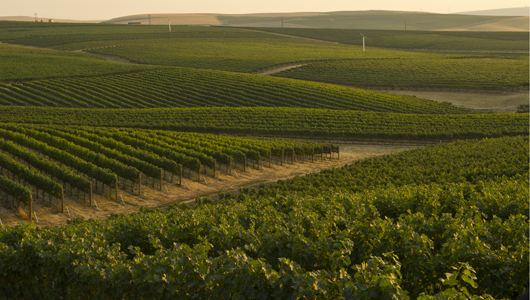 Four years ago, on his way home to Walla Walla from school in Arizona, Taylor Hermsen was thumbing through an in-flight magazine when he was struck by an idea for his doctoral research.

“The magazine was all about wine,” Hermsen said. “Being a native of the Inland Northwest, I thought I knew a lot about my home, but the fact that many people visiting eastern Washington are doing so because of the wine industry had never really occurred to me before. I started wondering how it all got going, and the project kind of snowballed from there.”

Now a Ph.D. student in history at WSU, Hermsen has been awarded the 2018 Boeing Graduate Fellowship in Environmental Studies to support his doctoral work developing an environmental history of Washington’s wine industry.

While still in the early stages, Hermsen’s thesis will explore the wine industry’s ecological impact as well as the complex social and cultural influence it has had on the state since the end of prohibition in the 1930s.

The Boeing Graduate Fellowship in Environmental Studies supports the multidisciplinary study of environmental issues and is made possible by a generous endowment from The Boeing Company.  More than two dozen students have received the Boeing fellowship since it was established in 1994.

“I am very grateful for the opportunity to provide an environmental historian’s perspective on Washington’s wine industry and how it has shaped regional identity,” Hermsen said. “While there have been a lot of economic and scientific studies done on Washington wine, there have not been a lot of historical ones, and I am excited to contribute to the literature.”

Birth of an industry

According to wine historians Ron Irvine and Walter Clore, Washington’s first  wine grapes were planted at Fort Vancouver by the Hudson’s Bay Company in 1825. By 1938, there were 42 wineries located throughout the state.

In the 1960s, commercial-scale planting began and the precursors of the state’s biggest wineries, Chateau Ste Michelle and Columbia Winery, were founded. WSU scientists played a big role in helping these now famous wineries get their start, Hermsen said.

“A lot of the groundwork that was needed to get the modern Washington wine industry going was done by WSU scientists in the ’50s and ’60s, ” Hermsen said. “They had to determine how to handle the soil and climate conditions and which grapes to grow. This was a really interesting period I plan to explore—where you had a lot of people doubting if the industry would be viable because of Washington’s climate and the fact that the California industry was up and running strong.”

In addition to his in-depth exploration of the industry’s early days, Hermsen plans to use geographical surveys and other scientific records to investigate how wine cultivation has impacted the landscape.

Another major component of his research will examine the wine industry from the perspective of its workforce. Hermsen plans to comb through oral histories housed at places like the Seattle Civil Rights and Labor History Project, and conduct in-person interviews with wine growers and laborers at several vineyards across the state.

“Going forward, it is really important to me to find and share the stories of the people who built the Washington wine industry,” Hermsen said. “Because the best way to tell history is through the voice of someone who was there.”