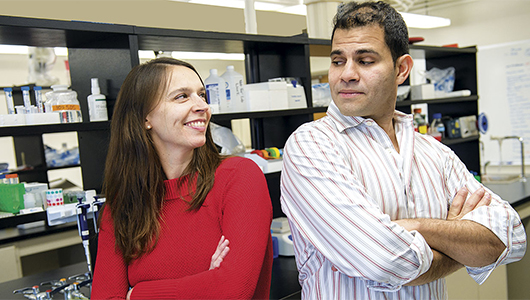 When Omar Cornejo got his genomic analysis back from 23andMe, he and his wife, fellow population geneticist Joanna Kelley, were both a bit surprised and vindicated. Venezuelan, Cornejo expected to see the alleles, or variations of a gene, from Native American, western European, and North African populations. But he was unaware that his family’s deep history also included ancestors from sub-Saharan Africa.

That just goes to show the importance of broadly sampling the genome, says Kelley. “The lesson is that if you just look at the mitochondria, you’d assume this person is from Africa. But if you look at just the Y chromosome, you’d assume that this is a Native American.”

Cornejo and Kelley study the emergence and spread, over space and time, of adaptations and mutations. Among many other things, population geneticists help pinpoint genes involved in disease, opening avenues of investigation that may result in treatments. Population genetics is also a key part in conservation, as understanding genetic diversity can help ward off extinction.

The couple has adjoining labs and offices at Washington State University, just as they did at Stanford, where they met as post-doctoral students in 2010.

Cornejo was working with Carlos Bustamante, one of the world’s great population geneticists. Next door was vivacious but no-nonsense Joanna Kelley, also working for Bustamante.

Kelley says, “Omar has this very Latin charm. So me, being a naïve Californian, I thought he was flirting with me. I said, ‘OK, what’s going on, are you interested?’ And he said, ‘No, I’m not interested at all.’ I said, ‘Oh, OK, I misinterpreted that.’ And that was it.”

At least for a month or two. But as the days rolled by, Kelley says, “I really thought he was interested.”

“I had no idea I was interested! But when she asked, Are you interested, I started looking through a different glass,” he says.

A week after they started dating, Bustamante asked Cornejo to move to Miami to work on a cocoa genome project. Cornejo said, “I’m sorry, but I can’t.”

Not only did the couple not break Bustamante’s lab, thanks to their research they managed to both score jobs at WSU.

In order to maintain academic independence, they don’t usually collaborate on projects together. But their adjoining labs and offices are home to a gaggle of grad students whom they train together. And there’s certainly plenty to do, as the population geneticists work to uncover the lineage and spread of important adaptive traits in fish and microbes.

Kelley works on mollies, tropical fish popular with home aquarium keepers because they’re hardy and colorful. But the mollies Kelley studies are beyond hardy: They live in springs rich in deadly hydrogen sulfide.

The springs are in southern Mexico, where volcanic activity emits the toxic gas. “The levels of hydrogen sulfide in these springs are incredibly high,” Kelley says, “and incredibly toxic for other fish—including freshwater mollies.”

Understanding how an animal genetically deals with a toxic environment may have therapeutic applications.

“Hydrogen sulfide has always been known as a toxicant and only much more recently appreciated as a potential therapeutic. We produce it in our cells endogenously. It’s now viewed as a signaling molecule in the cardiovascular system,” she says.

“To me, these fish are a fantastic way we can learn about the processing of hydrogen sulfide without doing experiments on humans. This is hopefully going to give us some really great insight into these pathways, because these fish have been dealing with it for thousands of years.”

Next door, Cornejo takes what amounts to an ecosystem approach to health. “We’re looking at pathogens and the host and asking what is relevant in the interaction between them and how does that interaction develop disease?”

Population genetics is a kind of time machine, as it allows scientists to peer into the distant past to see when, and potentially why or under what conditions, a trait emerged.

As important as it is to understand the demographic history of a single organism, microorganisms never work solo. They live in ecosystems called microbiomes.

There are two contexts to health and pathogenicity, Cornejo says. “One, the context created by other bacteria. The other is the human host. We have a lot of variation, different responses to drugs depending on our genetics.”

The couple decided to get married two weeks after Kelley’s interview at WSU. When they told Cornejo’s mother in Caracas, she said, “I am getting on an airplane.”

At San Francisco City Hall, they crammed their party of 11 into the judge’s chambers “Omar laughed a lot,” says Kelley.

“The judge started reading in Old English!” he says.

Kelley laughs, “‘With this ring I thee wed.’ And Omar says, ‘Shakespeare now?’ And everyone starts laughing.”

Even with two young children and busy research programs, they are sunny and mutually supportive.

“The idea of supporting each other is really important,” Cornejo says. “It’s not like we’re sacrificing anything for our careers.”

“We definitely don’t feel that way,” Kelley confirms. “This is our life and it’s awesome.”