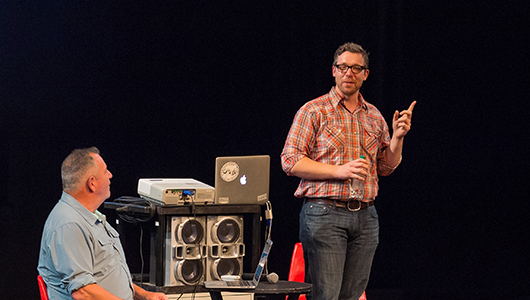 What would you do if your part in a local play entailed wearing an especially unpopular haircut? If you were Ted Tremper, you would embrace not only the role but the mullet, too.

Now an award-winning comedy writer, actor, director, and producer living in Los Angeles, Tremper (’04) was a junior majoring in English at WSU when he turned his stage character’s retro-’80s hairdo into the basis for a real-life comedy sketch/social experiment.

Acting unaware of his fashion faux pas, he strolled across the Pullman campus, greeting strangers and friends and taking note of the variety of responses he encountered.

“It was very funny,” he said. “Almost everybody would have a reaction to it. Some people would get really excited, and other people would just get so upset.”

“It was incredibly informative,” said Buddy Levy, Tremper’s then-professor who joined him in the fun one day. “People’s reactions ranged from hysterical laughter to avoidance to verbal ridicule.”

His insatiable curiosity about what attracts, amuses, and even offends people—combined with abundant creativity and empathy—propelled Tremper to success in college and further in the challenging entertainment business.

As a student, he demonstrated “a unique combination of raw honesty, humor, scathing social observation, and writing talent,” Levy said. “He took risks in his work, and was infectiously, intoxicatingly gregarious. People just wanted to be around him.”

Even with a mullet.

From WSU to Hollywood and back

After graduating from WSU in 2004, Tremper earned a master’s degree at the School of the Art Institute of Chicago and soon joined the nationally renowned Second City improvisational comedy troupe.

His many creative credits since then include producing The Daily Show with Trevor Noah and Hood Adjacent, both on Comedy Central. He more recently directed and produced Sarah Silverman’s I Love You, America! on Hulu, and his hilarious, award-winning co-creation Shrink is now streaming on NBC.com.

Twice in the past few years, he has taken time from his busy schedule to return to WSU Pullman to engage with students, faculty, and the broader community through the English department’s Visiting Writer Series.

In 2015, he led a week-long comedy writing and performance workshop for students and delivered a public presentation about his dynamic career. Last fall, he gave a humor- and insight-filled talk/performance to an appreciative crowd in Daggy Hall—the same place where, a dozen years earlier, he performed in numerous shows with the STAGE Student Theatre Group and the Nuthouse Improv group.

Those student theater experiences and many positive interactions with English faculty, both inside and outside the classroom, “set me free to actually start articulating what I thought and how I felt,” Tremper said.

“Whatever field you’re in—whether it’s arts or sciences—if you don’t receive a certain amount of education in how to articulate yourself to other people—but more importantly, how to articulate your thoughts, feelings, urges, sadnesses, joys, etcetera, to yourself—then you’re just going to wander around depressed and confused,” he said.

Like many other comic geniuses, Tremper knows firsthand about sadness and confusion. Between his sophomore and junior years at WSU, his mother died of a rare, inflammatory disease at their home in Seattle.

Emotionally devastated, he found new focus and resolve in his coursework and theatrical pursuits. The awkward haircut, which he gave to himself and dubbed “The Great Mullet which Liberates Upon Seeing”—a comic spin off the name of a religious shrine—was a touchstone for levity during that difficult time.

He credits the University, his professors, and his friends in the theater community with helping him persevere.

“Considering what I was going through personally at WSU and what I needed from the school, it gave to me ten-fold. And it taught me many things I didn’t know I needed to know,” he said.

“What I found in the college of arts, specifically, was a tremendous amount of investment from faculty to student. The intimacy of the English department and the feeling of interest and care from the faculty completely changed my life. There’s no other way to put it.”

Sharing a breadth of experience

In his three and half years as a student at WSU, Tremper made substantial, lasting contributions to the University and received a President’s Award for Leadership.

He was instrumental in revitalizing STAGE, which gives students the chance to experience all aspects of theater, from writing to directing to set production, and he was among the wave of improvisers who took the nascent Nuthouse from obscurity to three years of sellout shows. He also co-founded Wadleigh Fest, a 10-minute play festival that helped launch a regional-award winning, student-written work.

STAGE and Nuthouse remain dear to Tremper’s heart, and he hopes they can keep running despite recent budget cuts, he told his Daggy Hall audience in November.

“My ability to believe in myself was contingent upon finding that group of people—weirdos like me—and the reinforcement of building this theater from 20 people showing up for shows to doing the show with 800 people in Beasley Coliseum,” he said.

By returning to campus to meet and teach student writers, actors, and other creative thinkers, Tremper continues to make valuable contributions to his alma mater.

The opportunity to see alumni who are successful in their creative work helps students recognize their own potential and set a course for their careers, said Kimberly Burwick, clinical assistant professor of English and interim director of the Visiting Writer Series.

“Ted’s such a great resource because of his breadth of work experience as a writer, an improviser, a producer, and a director. Students see someone like themselves, people with big dreams,” Levy said.

“He connects so well with students; they respond to his enthusiasm, his biting sense of humor, and his ability to de-mystify things like writing and performing. He’s accessible and doesn’t intimidate students—he emboldens them.

While a student at WSU, Tremper received scholarship support from the Basil and Ella A. Jerard Endowment Fund through the Department of English.