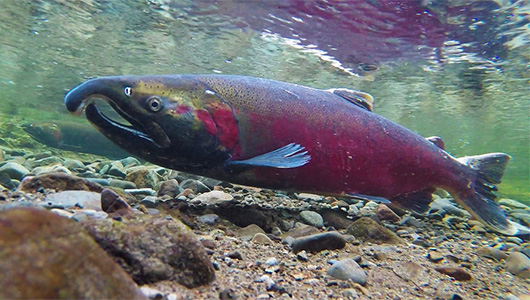 WSU researchers have found that salmon face a double whammy when they swim in the stormwater runoff of urban roadways.

First, as scientists learned a couple years ago, toxic pollution in the water can kill them. WSU researchers have now determined that fish that survive polluted stormwater are still at risk.

Experiments on both larval zebrafish, a model for salmon, and actual coho salmon showed that toxic runoff can also damage hair-like sensors the fish use to find food, sense predators, and find their way in the current.

“We’re showing that even if the fish are surviving the stormwater exposure, they still might not be able to detect the world around them as well, which can make it harder for them to find food or more likely for them to get eaten,” said Allison Coffin, an assistant professor of neuroscience at WSU Vancouver.

Coffin’s findings appear in Scientific Reports, an open-access journal from the publishers of Nature. Her co-authors include Jenifer McIntyre, a WSU aquatic ecotoxicologist who was part of a team that in 2011 found toxic runoff is killing adult coho in urban watersheds.

A bright spot in a follow-up study showed that soil-based filtering systems like rain gardens can improve survival. Paradoxically, the researchers found that the filtration benefit was not universal. Filtered water blunted the sensory damage to zebrafish but not coho. The fish is listed as endangered or threatened along much of the Pacific Coast.

Ordinarily, Coffin specializes in hearing, studying the hair-like tufts of sensory cells arrayed along each side of zebrafish in what is called the lateral line. Like the specialized hairs in animal ears, vibrations prompt ions in the hair cells to put out an electrical current that is then processed by the brain to decipher sound or detect motion.

In the current study, Coffin and her colleagues exposed fish to stormwater collected from Washington State Route 520 near the Montlake Cut. The highway connects Seattle to cities east of Lake Washington and, with some 70,000 vehicles a day, is one of the most heavily trafficked routes in the state, but with roughly half the traffic of Interstates 5 and 90.

Zebrafish larvae exposed to runoff from a June 2014 storm developed one-third fewer hair cells in their head and trunk. June 2015 runoff was outright lethal, and even at a 10 percent concentration of stormwater to pure water caused significant reductions in the cells. Coho embryos exposed to stormwater during development also had fewer hair cells, though to a lesser degree.

Coffin also treated the cells with a dye that glows when they are activated. She saw that cells of older zebrafish embryos didn’t glow much when they were exposed to water the December 2014 and June 2015 stormwater, meaning the cells weren’t very active.

“These results suggest that developed hair cells survive acute stormwater exposure but that function is compromised,” she and her colleagues write.

It’s unclear what might be happening. For the lateral line to develop, certain genes need to be turned on, said Coffin.

“What we think is happening is the stormwater is interfering with that genetic process,” she said.

The researchers also noticed that filtering stormwater is of limited help in protecting the lateral line. Previous work found that it prevents the stormwater from killing coho. But in this study the researchers saw it did not prevent defects in the lateral line of coho. This could be because coho take longer than zebrafish to develop, making their embryos more sensitive to trace amounts of toxic substances.

It’s unclear what in the stormwater is having these effects. Stormwater is effectively a toxic mixture that can include polycyclic aromatic hydrocarbons, many of which are carcinogenic, metals, suspended particles, and other organic compounds, most of which have yet to be identified.