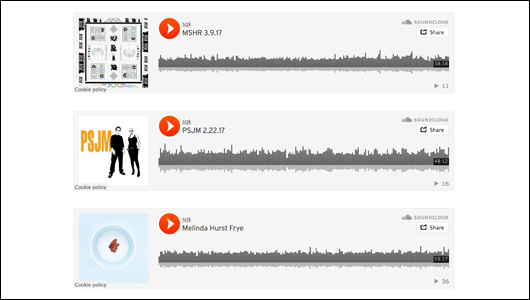 Squeak Meisel, the chair of the Department of Fine Arts and a renowned sculptor, has a confession to make about his podcast series, “Fly on the Wall.”

“I stole this idea from my friend Spencer Moody,” he says. Moody, a punk and noise rock musician and artist late of Seattle and now living in Los Angeles, recorded a series of interviews that inspired Meisel to realize that there is a whole “cohort of people who make different decisions than I do,” and who have a diversity of approaches to life, art, music, the world and its ambiguities.

“I thought, this is what I get from the visiting artists” the Fine Arts department invites to campus. “I get to expose students to all these different choices and lifestyles,” to all the experiences and decisions that go into becoming an artist.

Some of the artists interviewed on Meisel’s podcast, which premiered during the Fall semester, 2016, have shown their work at some of the biggest venues in the world, such as the Venice Biennial. That’s why they get the invite to come to campus, to teach for a few days, work one-on-one with undergraduate and graduate students, and to give a public lecture.

But Meisel realizes that not everyone has time to come to the lectures. With the podcast, “I can provide more people access to these conversations that few of us would otherwise get. I’ve had people telling me they were driving to Seattle and listening to my latest podcast.”

And while artists’ lectures are often pretty heady, “I can bring that back and say, ‘OK, tell me where you started.’ I think undergraduates”–and, really, any aspiring artist–“need to understand that they’re not alone. They have a tribe.”

The interviews are fascinating and offer views of the world and art making that are both accessible and mind expanding. “A lot of what an artist does,” Meisel says, “is frame something in a way that you wouldn’t necessarily think to frame it. It gives you a new perspective.”

One of Meisel’s interviews is with Sarah Kavage, an artist, researcher, and urban planner, who literally reframes landscapes. She’ll juxtapose an enlarged historical photo with its contemporary context, creating a startling effect, as if the viewer were looking into the past through a rupture in the space-time continuum.

Another is with Canadian Laurel Terlesky, who investigates the tactile organ of skin and our desire for connection. The past, so often misremembered, leaves a residue, Terlesky says, and in her 2013 work, Reverb, she investigates the “embodied sense of how we shape each other by our relationships” with “evidence… gathered from ten motherless daughters on how a motherʼs influence will echo and reflect inside us by moving in our shadow, both consciously and unconsciously, until it cannot be seen, heard or felt anymore.”

The podcasts are also practical, Meisel says, because “visiting artists bring the cold, hard reality of making it, and marketing yourself. It’s not all about hiding away and making whatever you want. We’re engaging with the world.”

The practice of science and art are not so far apart as we often make out, Meisel says. Art is a discipline that has “a storied history of investigating all kinds of things, mostly having to do with the expansion of perception.” He cites one of his favorite artists, the provocative and confrontational Paul McCarthy, who “doesn’t see himself as a rebel but as pushing up against things he doesn’t understand. He calls himself ‘a creative problem maker.’”

Meisel talks about art in terms of the semiotics of emotional evocation. He wants to teach his students that, instead of having an immediate, overwhelming visceral reaction to something–which is what advertising, marketing, and branding attempt to do through the manipulation of signs and symbols–they can instead look for those subtle signifiers that are moving them to feel certain ways. From this critical awareness bloom creative problem solvers and creative artists.

It’s that signification that Meisel loves about music, too. He says he grew up in a musical household, his father a band director. His father would blast “Also sprach Zarathustra,” the Richard Strauss piece used as the theme for 2001: A Space Odyssey.

Hearing that powerful music, “I used to think there were giants running through my house, and hide behind the couch, authentically afraid–and it was because of these subtleties” of signification. Later, in marching band at Kansas State University, they played a Monday Night Football half time, and Meisel thundered out the timpani solo from the Strauss, thinking, with both awe and glee, “I made a sculpture there! I touched everyone in this stadium because of that feeling I had when I was a little kid.”

Top image: Part of the “Fly on the Wall” catalog on Soundcloud.