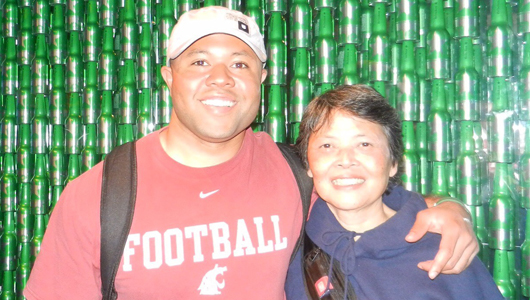 Molding better Americans is the motivation behind a new foreign language scholarship created for Washington State University students by alumnus Christopher “CJ” Johnson (’02), an officer and linguist in the U.S. Air Force Reserve.

“So few Americans speak a foreign language, and the outcome is that few Americans understand the world outside their immediate circle,” Johnson said. “But studying a foreign language and actually employing it forces you to think beyond your circle, to look beyond America, and that’s important because it makes you a better American,” he said.

The tuition-assistance scholarship in WSU’s Department of Foreign Languages and Cultures will be awarded for the first time this fall. By Johnson’s request, preference will be given to a junior or senior majoring in French language.

“We’re extremely grateful for Chris’s generous support of WSU students and the positive impact it will have on many students’ lives,” said Don Shearer, director of development for the College of Arts and Sciences. “It means so much when our young alumni take an active interest in the success of students who soon follow them.”

Johnson, 38, learned French as a child in California and majored in French studies at WSU, where he was a member of Phi Kappa Tau fraternity and the 1998 Cougar Football team. He was also a cadet in the Air Force Officer Training Corps and is now a lieutenant colonel and foreign affairs officer in the Air Force Reserve with previous responsibilities in Francophone Africa.

His language proficiency has been critical to his success in the military, especially on overseas deployments.

“It’s literally opened doors for me,” Johnson said. “I get a better paycheck because of my language skills, and in social situations, it’s a good party trick,” he quipped.

“Seriously, if you want to be good at your job and have credibility engaging with partners, you have to speak their language. You don’t need native fluency, but you have to be able to rap pretty well to be considered a legitimate partner in foreign affairs.”

While most of Johnson’s French-speaking counterparts are fluent in English, his ability to understand their native tongue ensures more accurate communications, especially on technical points, he said.

Since college, he learned Portuguese at the Defense Language Institute, and noted that being tri-lingual has improved his English skills, too.

“To speak and write well in another language, you have to understand grammar, and that understanding makes you a better English writer. It’s certainly helped me in my job and made me a better officer.”

Many broader benefits of foreign language study extend to people in all professions, not only the military, he said.

Johnson endowed the scholarship largely to honor his mother, Nannea, a native of Indonesia who was fluent in Indonesian, Dutch, French before she immigrated to the United States at nine years old. She mastered English in high school, studied French in college, and applied her diverse language skills throughout her adult life, working with law and accounting firms in California and Washington.

“She believed learning foreign languages was key to making a difference in the world,” Johnson said. “I’m doing everything my mom wanted to do herself—except for the military part.

“It’s about ensuring my mom’s legacy, but it’s also about Washington State University,” he said. “I’m a massive Coug and I wanted to give back to the University, but I wanted to give back in a different way than most people do. Beyond doing something for my fraternity or the alumni association, or even Cougar Athletics, this scholarship was a way I could hit different marks with my mom and WSU.”

“Mille mercis to CJ for his generosity in endowing this scholarship,” said WSU French professor Joan Grenier-Winther, one of Johnson’s fondly remembered teachers. “My greatest hope is that it will help students travel to and study in French-speaking countries so as to be immersed in both French language and culture. It is so important, especially in these days of alienation and division, that American students have the experience of being a ‘foreigner’ somewhere, to be placed in that situation of being ‘the other,’” Grenier-Winther said.

“But if travel is not an option for students, simply being exposed to the beauty of the language, as well as the significance of French history, literature, music, and art on Western civilization, through the study of French at WSU, will broaden their worldviews and enrich their lives.”

The Department of Foreign Languages and Cultures welcomes additional gifts to support the Christopher “CJ” and Nannea “Nan” Johnson Scholarship.