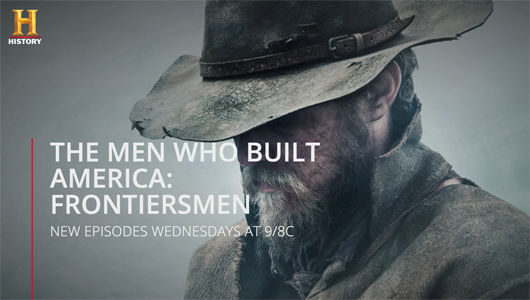 Narrative historian and English professor Buddy Levy is making a return to the History Channel.

Levy, the author of a 2005 biography about early American adventurer Davy Crockett, is among the experts interviewed in the cable network’s latest documentary series “The Men Who Built America: Frontiersmen.”

The new series by executive producer Leonardo DiCaprio explores the formative period of history from the Revolution through the California Gold Rush. It was a time when historical figures such as Crockett, Daniel Boone, Meriwether Lewis and William Clark, John Fremont and Andrew Jackson spearheaded the fledgling nation’s expansion west into uncharted land.

“When we first talked it was clear they were looking to understand more than just who the people were,” Levy said. “They wanted to know about the frontier and what it was like to set out into the unknown.”

The new project marks a return to History Channel for Levy, who was a cast member from 2010-12 on Brad Meltzer’s Decoded during its two-season run. Decoded explored historical mysteries and Levy was one of the show’s four researchers.

In this latest project, Levy was contacted back in 2016 and interviewed at his home in Moscow, Idaho. Producers knew about his book, American Legend: The Real-life Adventures of David Crockett, but sent him an exhaustive list of questions.

Levy is among several academics, historians and others providing their expertise to the four-part documentary series, which features dramatic reenactments of exploration in the frontier era. The show premiered on March 7, 2018; Levy appears in episodes 3 and 4.

History and adventure are common themes for Levy. His latest book is No Barriers: A Blind Man’s Journey to Kayak the Grand Canyon (2017), which he wrote with adventurer Erik Weihenmayer. His other books include Geronimo: Leadership Lessons of An American Warrior (co-authored with Mike Leach, 2014); River of Darkness: Francisco Orellana’s Legendary Voyage of Death and Discovery Down the Amazon (2011).

He also is the author of Conquistador: Hernan Cortes, King Montezuma, and the Last Stand of the Aztecs (2008), which was a finalist for the Pacific Northwest Booksellers Association Award, 2009, and nominated for the Before Columbus Foundation American Book Award, 2009, and the PEN Center USA Award 2009. His books have been published in six languages.

As a freelance journalist Levy has covered adventure sports and lifestyle/travel subjects around the world, including numerous Eco-Challenges and other adventure expeditions in Argentina, Borneo, Europe, Greenland, Morocco, and the Philippines.

By David Wasson for WSU Insider