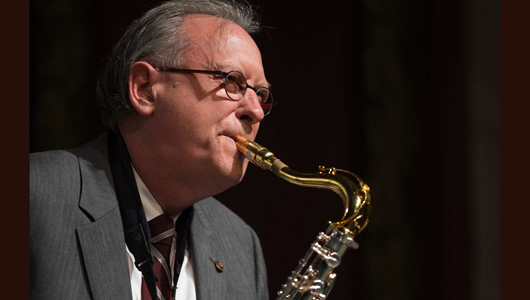 Greg Yasinitsky, Regents professor and director of the WSU School of Music is the winner of the 2017-18 The American Prize in Composition in the pops/light music division.

Yasinitsky’s composition “Jazz Concerto for Piano and Orchestra” was selected over applications from across the United States. It is a “third stream work which blends classical music and jazz,” he said.

Yasinitsky wrote the concerto for Willis Delony, pianist and professor of jazz studies at Louisiana State University, who premiered it last year with the Baton Rouge Symphony Orchestra, conducted by Timothy Muffitt. Delony and Muffitt subsequently nominated the work for the 2017 Pulitzer Prize in Music.

The concerto “is a unique work in the American orchestral canon, and most deserving of recognition,” Muffitt said.

It has been performed at WSU by the WSU Symphony Orchestra and Symphonic Wind Ensemble and is slated for future performances in Michigan, Louisiana, and China.

Yasinitsky is an internationally renowned composer, arranger, and saxophonist. He has received grants and awards from the National Endowment for the Arts, The Commission Project, Artist Trust, and the American Society of Composers, Authors and Publishers (ASCAP), among others.

He has published more than 210 musical works and performed in more than 40 countries worldwide. His compositions and saxophone playing are featured on more than 50 recordings.

At WSU, Yasinitsky is an award-winning educator and teaches saxophone, composition, arranging, and music theory. He performs regularly with student and faculty ensembles and community groups.

The vibrant and diverse WSU School of Music is widely known for excellence in undergraduate and graduate education. Established in 1901, it remains vital to the University’s commitment to providing a transformative student experience.

About The American Prize

The American Prize is a series of nonprofit competitions designed to recognize and reward the best performing artists, ensembles and composers in the United States based on submitted recordings. It was founded in 2009 and is awarded annually in many areas of the performing arts.

Additional information about the competition can be found online at theamericanprize.org website and its blog announcing the winners.

Top photo: Yasinitsky plays the saxophone during a performance.