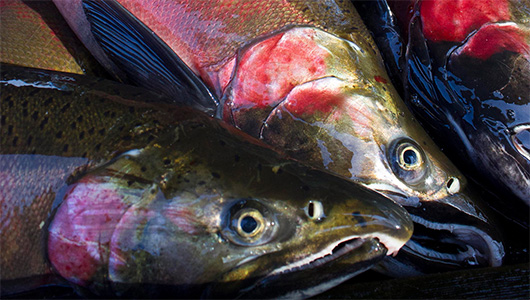 WSU scientists have discovered that different species of salmon have varying reactions to polluted stormwater runoff.

In a recent paper published in the journal Environmental Pollution, scientists found that coho salmon became sick and nearly died, within just a few hours of exposure to polluted stormwater. But chum salmon showed no signs of ill-effects after prolonged exposure to the same water.

“It really surprised us,” said Jen McIntyre, an assistant professor in WSU’s School of the Environment. “Not that the coho were affected so quickly, but how resistant the chum were. We saw no impact at all in the chum’s post-exposure bloodwork.”

Survival in the tank

Stormwater is toxic to fish because it can include carcinogenic hydrocarbons, metals and other organic compounds, most of which have yet to be identified.

McIntyre and her team collected stormwater runoff in large tanks from roads and highways in western Washington. Then they placed salmon in that water for four hours, or until the fish showed signs of illness. Blood samples were then taken from all of the fish.

Only a few coho lasted four hours before having to be removed. In the test afterwards, the team found a significant increase in lactic acid concentrations and their blood was thicker and more concentrated. Their blood pH was thrown off and the amount of salt in their plasma decreased significantly.

The chum test results showed none of those changes, all these fish lasting the full four hours without showing any signs of distress or sickness.

“These fish are very closely related,” said McIntyre, who works at WSU’s Puyallup Research and Extension Center. “They’re the same genus, but obviously something is significantly different physiologically. We just don’t know what that difference is yet.”

McIntyre worked on the project with fellow WSU scientists, along with colleagues from the NOAA-National Marine Fisheries Service and the U.S. Fish and Wildlife Service.

Clues for next round

McIntyre and her team noticed a few clues for where to start their next round of investigations: studying what makes the chum nearly impervious to toxic runoff. One is that the coho looked hypoxic, meaning they weren’t getting enough oxygen. But the water had plenty of oxygen, so they’ll look at blood circulation issues, how the fish metabolize oxygen in their muscles, and a few other areas.

“We don’t know if the thicker blood is a symptom of the problem, or if that’s the initiating event that then causes the oxygen deprivation,” McIntyre said. “There’s a lot of work still to come, but this really narrows down where we need to look.”

They’re also hoping that looking further into chum will turn up clues about how they resist the effects of toxic runoff.

In a later study, not included in this paper, McIntyre and her team conducted a prolonged exposure test on chum. Those fish swam in the stormwater runoff for four days and none of them got sick.

Another problem for the coho is that scientists don’t know what particular contaminants in the runoff are causing the problems.

“There’s a whole variety of heavy metals and hydrocarbons in that water,” McIntyre said. “And a whole bunch of chemicals we are working to identify so that we can protect more delicate species like coho salmon from the effects of human pollution.”