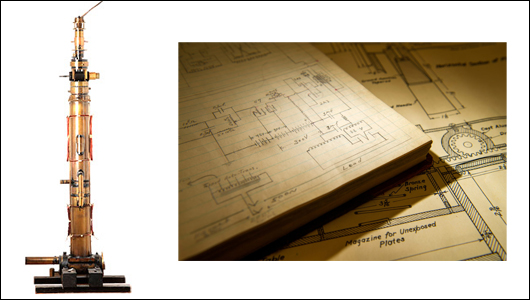 Early in the 20th century, a five-foot-tall golden microscope on the Washington State University campus was the most powerful imaging device on the continent. Despite its scientific significance, it has been largely lost from the pages of history.

“Europe’s first electron microscope earned its inventors a Nobel prize and is on display at the Deutsches Museum, the world’s largest museum of science and technology, while nobody really knows about our instrument.” said Michael Knoblauch, biology professor and director of WSU’s Franceschi Microscopy and Imaging Center. “Something of this significance should be in the Smithsonian.”

In 1931, the invention of the electron microscope by German scientists Ernst Ruska and Max Knoll ushered in a new era of scientific discovery. Their research would eventually enable humans to see atoms for the first time and dramatically increase knowledge of the cells that make up all plant and animal life.

Five thousand miles away in rural eastern Washington, Paul Anderson, a physicist at the Washington State College, read an account of Knoll and Ruska’s work and was fascinated by the potential of electron microscopy for medical and biological studies.

Anderson and Kenneth Fitzsimmons, a WSU physics lecturer, decided to begin construction of their own prototype electron microscope despite being unable to secure any funding for the project.

The two men worked in their spare time to collect parts for the instrument. They machined lenses, a camera and specimen chambers. For a power source, they obtained a discarded medical x-ray machine from a local hospital.

The microscope Anderson and Fitzsimmons built worked in a similar fashion to the optical or light-based microscopes American teenagers use in high school biology classes today.

However, instead of using glass lenses to focus rays of light, the WSU microscope used electromagnetic lenses to focus electrons into a very thin beam that was directed onto a specimen. The electron beam then passed through the specimen and cast a magnified image of the object onto a fluorescent screen that could be photographed and studied.

For three years, Anderson and Fitzsimmons took hundreds of electron microphotographs of thin tungsten wire and other materials. They meticulously recorded their results in a record book,  which is currently housed in the WSU Libraries’ Manuscripts, Archives and Special Collections.

Despite their initial success, the two scientists’ progress was slow and they were only able to achieve magnification of objects slightly better than that of an optical microscope. The lack of funding finally took its toll and Anderson and Fitzsimmons stopped their research entirely in 1938.

That same year, a research group at the University of Toronto in Canada built North America’s second electron microscope, and in Germany, Ruska and colleagues continued making rapid progress.

Anderson and Fitzsimmons’ work was largely forgotten until 1965 when WSU scientists Edward Steever and Dan Marlow found the discarded parts of the early electron microscope in storage in the WSU physics department. The two men reassembled the instrument and it has since been on display in various locations of the WSU campus in Pullman. It can currently be seen at the entrance to the WSU Franceschi Microscopy and Imaging Center in Abelson Hall.

Knoblauch said he’d like to see greater recognition among the scientific community and public for the work by Anderson and Fitzsimmons.

“From a historical viewpoint, Anderson and Fitzsimmons were pioneers in the field of electron microscopy,” he said. “Having their microscope here at WSU is a real privilege and I would like to spread the word so that more people can have the opportunity to come and see it.”