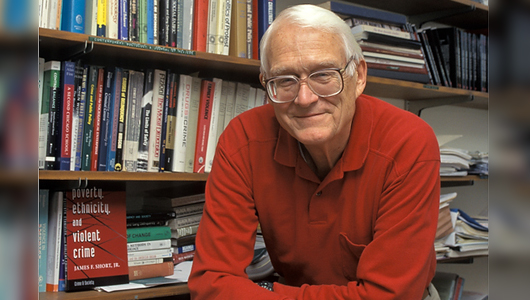 James F. Short Jr., professor emeritus of sociology and one of Washington State University’s longest-serving and most distinguished faculty members, passed away on May 13, 2018, at the age of 93.

Internationally respected for his expertise and understanding of group dynamics and sociological risk factors, his groundbreaking research into the conditions under which violence, delinquency, and crime occur helped to shape the field of modern sociology and enabled researchers to more fully explore how organizations of all kinds work together. He was among the pioneers in developing robust methodology for the study of delinquent and illegal behavior.

Known to friends and colleagues as Jim, he joined the WSU faculty in 1951. Although he retired from active teaching in 1997, he continued to collaborate on research and serve as a graduate student mentor. Until very recently, Jim could still be found most days working in his office on the second floor of Wilson-Short Hall. The building was re-dedicated in 2009 to honor his contributions to the University. Between the comfortable rhythm of the academic year and the invigorating company of younger colleagues, Jim once observed that retirement was “much like being on permanent sabbatical.”

In the early 1960s, Jim led a unique study into urban gang behavior in Chicago. Using novel techniques, he and his colleagues worked for three years with numerous gangs and surveyed dozens of gang members, trying to learn whether boys with monikers like Smack Daddy, Duke, and Commando were so very different from their counterparts in wealthier parts of the city. The analysis opened a window into the everyday experience of gang members and resulted in the now classic textbook Group Process and Gang Delinquency.

Over the past decade, he had been working with Lori Hughes (’03 PhD), now an associate professor at the University of Colorado Denver, to digitize and analyze the historic qualitative data he and his team gathered in Chicago. The data has contributed to more than two dozen publications and graduate theses from the 1960s to the 2010s, with more still in the works.

“I just find it fascinating,” Jim said in a 2010 Washington State Magazine article, “here I am, more than half a century after these data were collected, (still) enjoying analyzing (them).”

Over the course of his six-decade career, he educated generations of sociology researchers and academics, and authored more than 75 papers, 24 books or monographs, and 50 book chapters, as well as nearly 20 encyclopedia entries.

Most recently, he provided the introductory chapter of the inaugural Annual Review of Criminology. The editors specifically requested Jim to provide a reflection on his career and influences in studying criminology for the January 2018 publication.

In his own words, Jim “was curious about the world around me,” and was well aware of how his small-town childhood and experiences in Japan as a member of the U.S. Marines at the end of World War II helped to shape the course of his life’s work.

Following his military service, Jim earned his doctoral degree at the University of Chicago and was promptly hired at WSU as a sociology instructor by then-department chair Wallis Beasley. It was the first time living in the West for the Illinois native and his wife, Kelma, and they fell in love with the Palouse.

Jim served as dean of the WSU graduate school from 1964 to 1968, and in 1970 became founding director of the WSU Survey Research Center, the very first telephone survey unit in the country. Now known as the Social and Economic Sciences Research Center, Jim’s colleagues continue to build on his legacy of innovative social science data collection methods and practice.

In 1968, he was appointed co-director of research for President Lyndon Johnson’s Commission on the Causes and Prevention of Violence, and nearly four decades later served on the advisory board for the Social Science Research Council’s Task Force on Hurricane Katrina and Rebuilding the Gulf Coast. In between, Jim continued to teach and expand his research, serving as a fellow or visiting professor at universities and organizations across the U.S. and abroad, including Stanford, Cambridge, the University of Chicago, and the Rockefeller Center in Bellagio, Italy. Additionally, from 1970 to 2007, Jim held a series of six different advisory roles on the National Academy of Sciences’ National Research Council.

Honors and service to the discipline

Recognition of his outstanding contributions at Washington State University culminated with the rededication of Wilson-Short Hall in 2009 and also included:

In his most recent writing, “Reflections on Disciplines and Fields, Problems, Policies, and Life” for the Annual Review in Criminology, Jim reflected on his early work with President Johnson’s national commission in the late 1960s and its relevance to current times: “The country was undergoing tremendous social changes, seemingly moving from one crisis to another, and I had a front row seat. The times we now live in are equally fraught. We should not shirk from our responsibilities, either as scholars or citizens, for active participation in them.”

The family requests memorial gifts be directed to the James Short Professorship fund or the Jordan Schnitzer Museum of Art WSU.

Kimball Funeral Home in Pullman has been entrusted with arrangements. Plans for memorial services are undecided at present.

By Joanna Steward, College of Arts and Sciences, with thanks to previously published articles by WSU News, Washington State Magazine, KREM/Murrow News Service, and the WSU Department of Sociology.