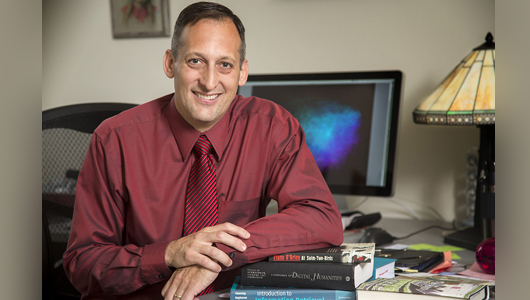 World-renowned literary scholar and data scientist Matthew Jockers has been named as the next dean of the College of Arts and Sciences.

“Dr. Jockers has the perfect skill set to lead the next chapter in the evolution of the College of Arts and Sciences,” WSU Provost Dan Bernardo said. “He has extensive industry experience and possesses a strong record of scholarly accomplishment. In addition, throughout his career and during the interview process, he demonstrated the ability to work collaboratively with faculty, staff, students, and stakeholders.”

Jockers, currently a professor of English and associate dean for research and partnerships in the College of Arts and Sciences at the University of Nebraska, will begin his new role at WSU on Aug. 1. Provost Bernardo announced the hiring following completion of an extensive nationwide search.

Right person for the job

Over the last 20 years, Jockers has blended his love of literature and computer science into a successful career as an educator and administrator, researcher, and tech industry insider.

He is a faculty fellow in the University of Nebraska Center for Digital Research in the Humanities and the Center for Great Plains Studies; faculty affiliate in the Center for Brain, Biology and Behavior; and director of the Nebraska Literary Lab.

As a member of the dean’s executive team at the University of Nebraska College of Arts and Sciences, Jockers helped lead major research and economic development initiatives and expanded the college’s collaborations with industry and other outside entities.

“I am incredibly honored to be joining Washington State University,” Jockers said. “I am excited about the diverse range of people and disciplines in the WSU College of Arts and Sciences. Throughout my career, I’ve seen the amazing things that can be done when people with different kinds of experience and expertise work together toward a common goal. The people I have met and talked to at WSU are exactly that sort of people, and they are full of energy and enthusiasm for the College.”

Jockers’s research uses computers to analyze written text. His literary training is in Irish and Irish-American literature of the late 19th and early 20th centuries.

He has authored and co-authored numerous papers on everything from text mining and stylometrics to profiles of Irish writers living in Kansas, Montana, and California. His books include Macroanalysis: Digital Methods and Literary History (2013); Text Analysis with R for Students of Literature (2014); and The Bestseller Code: Anatomy of the Blockbuster Novel (2016).

Before moving to Nebraska, Jockers served for 11 years as a lecturer in the English Department at Stanford University. During that time, he managed the Academic Technology Specialist Program, co-founded the Stanford Literary Lab, and was co-investigator and project manager of the Mellon-funded Software Environment for the Advancement of Scholarly Research project.

In addition to his 20 years as a professor and administrator, Jockers has founded and directed a non-profit organization, directed research and development at a technology startup company, worked as principal research scientist and software development engineer in iBooks Engineering at Apple, and cofounded a book industry text mining company.

In 2017 Jockers was presented the University of Nebraska’s breakthrough Innovation of the year award for his development of the “bestseller-ometer,” an algorithm designed to identify the linguistic hallmarks of bestselling fiction.