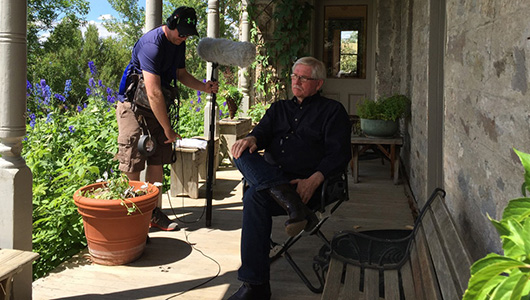 Recent discoveries by a WSU history professor and his students may hold the key to an ongoing American West conflict.

After nearly 10 years of research, Professor Orlan Svingen, along with students and colleagues in the WSU public history field schools, unearthed an official U.S. government document from 1870 and several supporting records that shed new light on conflicting claims about historical use and ownership of large swaths of southwestern Montana and northwestern Wyoming.

The revelations contradict some long-standing assumptions about the land and its previous and current inhabitants, and could dramatically reshape not only the historical record but the future of the land itself.

“It’s like an historian’s dream, right?—to find a document in the National Archives that changes the way that everyone thinks about a particular period in history,” said John W. Mann, professor of history at the University of Wisconsin, Eau Claire. Mann is one of Svingen’s former students and co-taught one of the summer-semester field schools.

The story of the historians’ search and potential implications of their discoveries is the subject of a new documentary movie titled In Good Faith by Emmy Award-winning Naka Productions. It is set for release to public media outlets in the spring.

Shot in Idaho and Montana, In Good Faith features Svingen, several of his students and colleagues, and leading members of the Shoshone-Bannock American Indian Tribes, whose famously peaceful ancestors include Sacajawea and Chief Tendoy. It was Tendoy who, in 1868, negotiated and signed a treaty that was never ratified but was partially acted upon through removal of the Native Americans from their ancestral land in 1875, Svingen said.

In their research, the historians scoured the National Archives and numerous community resources, including old bulletins, photographs, illustrations, and newspapers on microfilm. They also interviewed dozens of Indian elders and other area residents, seeking information about Indian life and white settlement of the region in the 1800s.

The information they found describes the land Tendoy and his four sub-chiefs ceded to the U.S. government in 1870. It might prove the indigenous people who lived there were never fully compensated for it, Svingen said.

“For generations, the public has been led to believe some things which the documents we found clearly refute,” he said. “Although the people of Montana Territory did the right thing back in 1868 and 1870, the ball was dropped and serious errors of tremendous impact were made by the federal government.”

As the significance of the historians’ findings became increasingly clear, Svingen said, “I was astonished. I was appalled. I was stunned.”

The movie’s title refers to a promise made to American Indians by Congress in the Northwest Ordinance of 1787, said Jared Chastain, a WSU history graduate student and participant in the field school research. The ordinance states: “The utmost good faith shall always be observed towards the Indians. Their land and property shall never be taken without their consent. And in their property rights and liberty, they shall never be invaded or disturbed.”

“This country forgot about our people,” said Leo Arriwite, a leading member of the Agai’Dika-Shoshone band and a co-instructor of the 2016 field school. “They made a lot of promises and they said they were going to help our people,” he said.

“We’re trying to correct a wrong—that’s our ultimate goal,” said Darrel Shay, an Agai’Dika-Shoshone elder who appears in the documentary.

Positive reviews for In Good Faith

Naka Productions has hosted test screenings of In Good Faith in several small towns located in the heart of the subject area and received positive reviews from Indian and non-Indian audiences alike, Svingen said. Final previews are set for August 24 and 25 at the Sacajawea Interpretive Culture and Education Center in Salmon, Idaho. Admission is free.

Production of In Good Faith was underwritten by longtime WSU supporters Jack Creighton and his wife, Janet, who earned her doctoral degree in history at WSU, working with Svingen. The documentary and other field school experiential-learning projects aim to provide public education resources through interpreting historic sites and people of the American West.