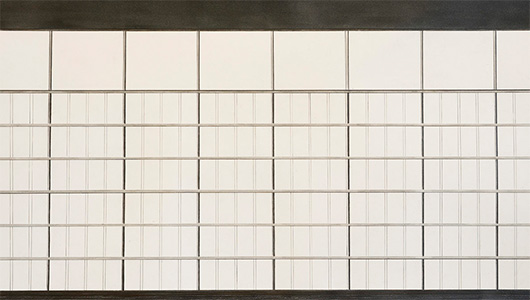 The show, which opened Aug. 18, includes almost two dozen drawings of the Veterans Memorial Coliseum where the Blazers won their most recent championship … in 1977. The drawings are inspired by Bawa’s fascination — her “obsession,” as she says — with the coliseum. “Some people find it extremely boring, but I chose to take this building and put it on a pedestal and worship it like a mad person.”

The result is a suite of drawings that are intricate and, while certainly architectural, are also poetic, urging the viewer to blaze a trail alongside the artist in order to see the building in a new way.

Like her passion for the Blazers, Bawa often takes the underdog’s side, depicting a building that is no longer appreciated, or an object that has been discarded, in a new light in hopes that we, in turn, will see it with new eyes. She describes this approach to art as “an intervention, a guerilla attack, but in a playful way and without destroying anything. My interventions are meant to tease and to draw attention to things.”

This is art as critical thinking, in other words, even if, at the same time, there is a kind of calm and meditative focus that she describes as providing “a kind of Zen moment, basically.”

At WSU Vancouver, Bawa says, “My ability to think outside the constraints of the art market are strengthened.” Her nearest faculty neighbors are a geographer and a neuroscientist. On a campus known for its research acumen, students from all disciplines are drawn to the small fine arts program that is noted for its ability to get people thinking outside the normal boundaries of academic disciplines.

Bawa has long worked across artistic disciplines in a mix of media, creating installations that sometimes incorporate photos of drawings mounted on tripods at a building site, for instance, or beautifully lighting a scaffold in the abandoned Astor Hotel in Astoria. The

latter, called “Mineral Spirits,” is a group of nonfunctional scaffolds painted gold which, she says on her website, “hint at the hotel’s glorious past.” Together with lush stage lighting, Bawa says that she was invoking “a noble presence that looks glorious — and does nothing.”

What that doing nothing actually does, though, is direct the viewer to see the space in a wider context, a context that summons the ghosts of the location’s rich history. Situated at the mouth of the Columbia River, the Astor was, at one time, the tallest building on the Oregon coast and was a beacon to travelers and immigrants from all over the world.

Bawa’s interest in architecture developed in India. She grew up in New Delhi, which she describes as “a busy, organic city” that is in sharp contrast to Chicago where, at the School of the Art Institute, she got her MFA. Chicago, she says, fascinated her with its grid plan and “all the chaos that stayed within that grid.”

New Delhi, she points out, was a planned city “but when you put 5,000 people where there are supposed to be 10, all plans go out the door.” She also grew up visiting Chandigarh, the capital of two neighboring states, Punjab and Haryana, and designed by the Swiss-French utopian-visionary architect, Le Corbusier. Indeed, Chandigarh’s Assembly building, with its long lines and gridded facade, bears a striking resemblance to the coliseum in Portland.

With the coliseum drawings, Bawa pushes her own boundaries and indulges her obsession with architecture. The Regional Arts and Culture Council of Portland, which collects works-on-paper for a “visual chronicle” of the city, had commissioned her to make a couple drawings — but that soon turned into a whole series, she says.

The coliseum was in 2016 named to the National Register of Historic Places. The Blazers have long since left to play elsewhere, and the site resonates with all that came before it. Formerly the Albina neighborhood and home to many African-Americans, the area was repeatedly redeveloped, and its inhabitants relocated, as Interstate 5, Highway 99, and the coliseum itself were built in the 1940s and ‘50s.

All of that history is background for a collection of drawings that are, curator Grace Kook-Anderson writes in the exhibition brochure, “a combination of perspectives, blips of color, misremembered columns, atmospheric changes, gradations, and soft contrasts that bring her far closer to understanding the historic building than any single rendering could attempt.”