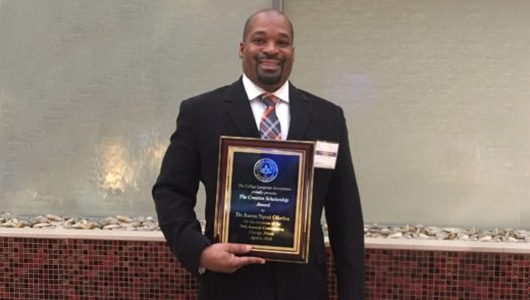 Aaron Oforlea’s first book, James Baldwin, Toni Morrison and the Rhetorics of Black Male Subjectivity, has earned the College Language Association’s Creative Scholarship Award for 2018. The international honor, whose previous winners include renowned scholars from Harvard, Penn and Stanford, recognizes excellence in literary criticism and is awarded at the organization’s annual convention.. The nominations are blind, so Oforlea’s guard was down when the honor came his way.

“I was sitting at my table not paying too much attention to the awards banquet when I noticed everyone looking at me, so I asked the women sitting next to me, ‘Did they say my name?’” Oforlea says. “I couldn’t believe it. I was overwhelmed with joy.”

The inspiration for Oforlea’s book originated from his interest in, “how African American men achieve their dreams and goals despite racism,” he says. Oforlea, an associate professor of English,  studied the works of two of his favorite authors – Baldwin and Morrison – and analyzed their respective African American characters, and how they navigated their challenges. The book, published by Ohio State Press in 2017, drew interest from prominent university presses, and praise from colleagues and scholars.

“You submit so many different things – articles, grants, proposals – and you learn not to hang too much on one thing,” Oforlea says. “To win the award, I think for me it’s validation that I’m on the right track, that my work is making an impact in the field.”

“It was an honor to read an early draft,” Chilson says. “Aaron has such a fresh voice, a fresh point of view and he really seeks out critical perspectives. He puts his whole heart into his work. He took the critiques seriously and his book sailed off into the horizon.”

“Many of my colleagues read widely and they can certainly engage the topics that I’m writing about,” Oforlea says. “Colleagues read portions of my book and gave me good feedback, but for the most part it’s private laboring, which I think most of our publications are.”

The English Department as a whole has excelled in recent years, publishing at a torrid pace, and producing quality publications to match the quantity. Department chair Todd Butler says English faculty published 12 books or edited collections in 2017-18 and another 10 are forthcoming. The group also published more than 40 essay-length works and another 22 are soon to be published.

The department offers funding for summer fellowships and allotments for newly tenured and promoted associate professors and clinical associates designed to jumpstart new connections and research, according to Butler.

“Honestly, much of the credit just goes to our faculty,” Butler says. “For years, we’ve punched above our weight class in terms of our output versus our peers and our aspirational peers. They’re a smart, innovative group.”

Top photo: Oforlea with his award at the College Language Association ceremony.

By Todd Mordhorst for the Office of the Provost