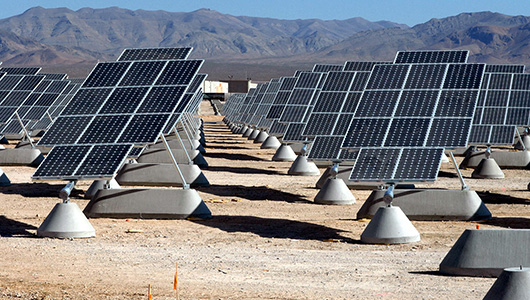 As the battle lines are drawn for next month’s hotly contested midterm elections, some Americans may be comforted to know there is at least one area of common ground for Democrats and Republicans: regardless of political standing, age or gender, U.S. voters are in favor of renewable energy, according to research by Christine Horne, professor of sociology.

Horne and Emily Kennedy, a former WSU sociology professor now at the University of British Columbia, are the authors of a new study in the journal Environmental Politics that shows while conservatives and liberals tend to disagree on many environmental issues, they both view the development of solar power and other forms of renewable energy as financially savvy and a step towards self-sufficiency.

The research identifies an area where policymakers on both sides of the aisle could work together. It also could have important implications for utility companies and other businesses involved in the manufacture and sale of renewable energy technologies.

“I think anyone who is paying attention to our current political climate might be interested to see there is an area of common ground,” Horne said. “Marketing renewable energy as a way to be more self-sufficient is a message that would appeal to both liberals and conservatives.”

Support for renewable energy has been growing steadily across the U.S. in recent years. A 2016 study by the Pew Research Center found 83 percent of conservative Republicans and 97 percent of liberal Democrats favor solar farms. Conservative states are also as likely to support renewable energy and energy efficiency policies as liberal states, according to a 2016 study led by researchers at Vanderbilt University.

While support for renewable energy among Democrats is largely thought to stem from environmental concerns, the reasoning behind Republicans’ support is less well understood.

To better understand support for renewable energy among both conservatives and liberals, Horne and Kennedy conducted in-person interviews at the homes of 64 registered Democrats and Republicans across Washington state.

The researchers asked study participants about their views on people who had solar panels or who engaged in other pro-environmental behaviors and their own interest in installing solar panels.

The team also conducted a larger, nationally representative online survey that asked participants about their views of a family in their neighborhood that recently installed solar panels on their home.

Funding for the research was provided by the National Science Foundation and a WSU New Faculty Seed Grant.

Financially wise use of resources

Rather than seeing renewable energy as tightly bound to environmentalism, the study’s conservative respondents were more likely to view it as financially wise and a good use of resources, Horne’s team found.

For instance, Ted, a conservative interviewed in the study, said he thinks very highly of people who have solar panels on their home and assumes they are smart, frugal and self-sufficient. When asked if he thinks these people may be concerned about the environment, Ted responded, “I think if people thought to put solar panels on their roof, they would not think that was helping the environment at all. They would think that was helping them financially, because they’re not paying a power bill.”

Democrats interviewed in the study also viewed renewable energy as financially smart and contributing to self-sufficiency.

However, unlike their Republican counterparts, the Democrats strongly linked renewable energy with environmental protection, reducing carbon emissions and helping other people.

When asked if she feels responsible for reducing her personal environmental impact, Caitlyn, a Democrat, responded:

“Because I enjoy being out in nature, I think everyone else should be able to enjoy it. I think our kids, and our kids’ kids and everyone should have the same benefits…that we are afforded right now. I think that they should all be afforded that as well, if not even more than we have right now.”

The research helps explain how politically polarized attitudes about the environment can exist alongside bipartisan support for renewable energy. It also suggests that efforts to encourage Republicans to invest in solar may be more effective if they emphasize self-sufficiency.

“When it comes to climate change and other environmental issues, Democrats and Republicans often disagree,” Horne said. “However, our results show both groups value renewable energy and self-sufficiency. We might be able to make more forward progress if our policies and advertising were to focus on these areas of agreement rather than the issues we don’t agree on.”