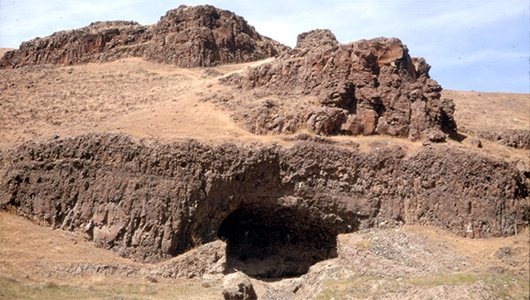 More than 8,500 years ago, a group of people used a rock shelter at the confluence of the Palouse and Snake Rivers as a base camp. When rediscovered in the early 1950s, the shelter amazed scientists, including Washington State University archeologist Richard Daugherty, with its wealth of artifacts—and the age of its human remains. Named after the property owner at the time, the Marmes Rockshelter was soon inundated by waters from the recently closed Lower Monumental Dam on the Snake. Although a levee had been built by the Army Corps of Engineers to keep the shelter dry, the Corps neglected to take into account the layer of permeable gravel beneath the site. Within three days, it was all under water.

There are more than 60 dams in the Columbia River watershed. An average of 72 miles apart, the dams were built over a period of about 80 years. As the dams were closed, and the waters behind them piled up, entire Native villages were drowned.

Like the Marmes shelter, some of those sites were ancient. Archeologists scrambled to collect what artifacts they could before the waters made collection difficult or impossible.

“Even so,” says WSU anthropological archeologist Shannon Tushingham, “a lot was lost and a lot is underwater.”

But a lot was saved, too. Tushingham says that WSU has a warehouse full of archeological collections. “We are lucky to be the stewards of these collections,” she says. “There’s still so much to learn!”

Worldwide, Tushingham says, there is a curatorial crisis: artifacts collected but left unanalyzed in museums and warehouses due to lack of funding. Tushingham, who is also the director of WSU’s Museum of Anthropology, is hopeful that she and her colleagues will be able to push for funding to do that analysis. Not only would that take Pacific Northwest Indian studies “to a new level” but, as well, it’s a great way to train the next generation of archeologists.

Although jobs are limited in academia proper, Tushingham points out that there’s a lot of work available outside of universities in cultural resource management.

In the past, researchers would dig as much as they could, Tushingham says. “They’d bag this stuff up and it’d get stuck in a museum. “People weren’t really thinking about the cost of curation or what it would take to go through to analyze all these materials. You could easily spend ten times as much time analyzing as extracting artifacts.”

Tushingham says she and her colleagues and their students are sifting through the collections, “some of which is still in the bags it was put in when excavated,” creating a digital catalog that will enable researchers to access the materials.

Not surprisingly, considering the long reliance of indigenous peoples on salmon, WSU has lots of salmon bones in its collections. Using the collection, graduate student Bobbi Johnson recently worked on salmon genetics. Extracting DNA from salmon bones, some as much as 7,000 years old, she learned that the genetic diversity of Chinook salmon has significantly declined.

“And that’s just a little piece of what we have here,” Tushingham says. “There’s a lot of Washington’s past here, waiting to be discovered.”