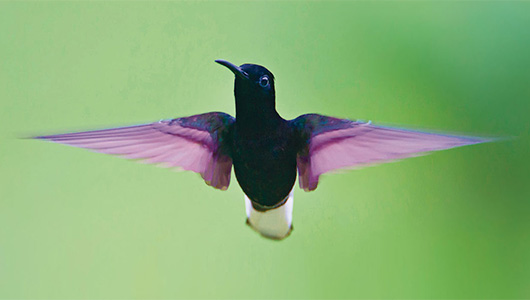 For decades, scientists have been intrigued by a black hummingbird that appears to be singing, its throat and jaw moving in all earnestness, but without making any obvious sound. Augusto Ruschi, a naturalist who catalogued dozens of hummingbirds in Brazil’s Atlantic Forest, first noticed it in 1959.

The bird, called a black Jacobin, appeared to have portions of its song that were ultrasonic, “inaudible to humans,” said Ruschi, “and while one would only perceive it with special equipment, one can notice the moment in which the bird emits it, as its guttural region makes characteristic movements, commonly observed when a bird sings.”

It would be years before that special equipment was available, and it happened to come from the lab of Christine Portfors, a professor of biological sciences at Washington State University Vancouver. Portfors usually studies bats, who navigate their world by processing the echoes of sounds too high for us to hear. But soon after she came to WSU Vancouver in 2001, she met Claudio Mello, a behavioral neuroscientist at the Oregon Health & Science University. A student of vocal learning in birds, as well as a Brazilian, he too had noticed the black Jacobin’s singing behavior and an odd, high-pitched part of its song.

Together, Portfors and Mello lit on a little noticed, seen-but-unheard feature of the natural world.

“Neither one of us could have done this project by ourselves,” Portfors says. “Science is all about working together.”

The two visited Brazil and made some recordings in 2005, and Mello later returned to make hundreds more recordings with Portfors’ equipment. Back in the United States, their labs made digital versions of the recordings and visualized them to analyze the songs’ characteristics. They were surprised to not only confirm that the vocalizations were ultrasonic but that they were well above the range of hearing documented in nearly 50 bird species.

“Birds should not be able to hear the high frequencies in the songs that the hummingbirds are using,” said Portfors. “Nobody has ever tested the hearing ability of a bird and shown that they can hear up into those ultrasonic frequencies.”

Humans hear between 20 hertz and 20 kilohertz, with the higher frequency falling off with age. A barn owl, which Mello calls “a hearing specialist,” can hear eight or nine kilohertz. The Jacobin’s vocalization starts at 10 kilohertz, with higher harmonics reaching 80 kilohertz, well outside the range of human hearing, as well as avian hearing. Or so we have thought.

“If they can hear the vocalizations they make,” says Mello, “starting at 10 kilohertz but also going into a much higher range, then it would be an example of an extremely high frequency adaptation for birds that has not been described before.”

It’s possible, but unlikely, that the birds are hitting these frequencies by some sort of accident, or that they have no purpose. But animals generally make sounds that their mates can hear.

It’s more likely that the vocalization is yet another aspect of the natural world that, while outside the unaided human senses, has a quotidian function for the creatures using it. Sharks detect minute electrical fields to sense the world around them. Birds can see the ultraviolet light of each other’s iridescent wings, possibly to gauge potential mates. The sides of some fish have hair-like sensors they use to find food, sense predators, and find their way in the current. In fact, earlier this year, WSU researchers Allison Coffin and Jen McIntyre reported that polluted stormwater was hindering the development of the hairs in coho salmon.

It’s not clear why a bird would want to sing so high. Mello hypothesizes that it helps it deal with the general din of the Atlantic Forest, a lush biome thick with creatures, including some 40 other species of hummingbirds.

“It’s an amazing area with very high diversity and lots of species,” he says. “That’s one possibility, that they developed this ability to be together with all these other species and have their own private channel of communication. It’s not being interfered with. Other birds are not hearing them.”