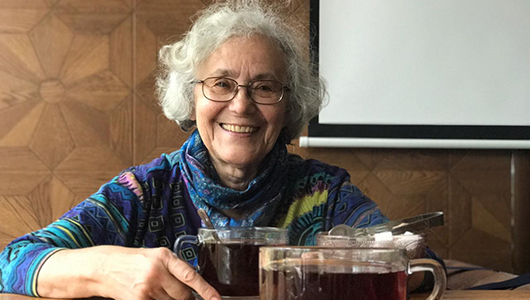 Marina Tolmacheva, WSU professor emerita of history and an expert in Islamic and world history, has been awarded a four-month Fulbright Fellowship to teach and consult on academic development at KIMEP University in Almaty, Kazakhstan.

Tolmacheva recently began teaching courses on Central Asian history in the context of world history to graduate and undergraduate students at KIMEP, a North American-style independent university, formerly known as Kazakhstan Institute of Management, Economics, and Strategic Research. While in Almaty, she is also teaching graduate students in history at Al-Farabi National University (KazNU).

“For my lectures, I’m drawing from my many years in teaching interdisciplinary and world history at WSU as well as my research in broad Islamic cultural history, including women’s history and historiography of Central Asia,” she said. A native speaker of Russian, one of Kazakhstan’s official languages, she is teaching primarily in English.

Tolmacheva’s additional experience in academic development and assessment at WSU and universities overseas also informs her work with KIMEP administrators who are seeking to infuse a global perspective into their Central Asian Studies and General Education curricula.

“Whether it is consulting on matters of curriculum reform, developing student-centered pedagogy or interacting with colleagues and students, I want to help make positive change,” she said. “I’m especially interested in working with institutions in post-Soviet Central Asian republics to foster sustainable research and teaching links with U.S. institutions of higher learning that will stand the test of time.”

After joining WSU faculty in 1987, Tolmacheva served in various administrative capacities, with her teaching focused on undergraduate courses in Middle East history, Islamic civilizations and world civilizations. Her research has dealt primarily with the cultural and scientific history of Islamic civilization, including the Arab countries and Central Asia.

In 2006, after serving WSU as a history professor, associate dean of the College of Liberal Arts and director of the Asia Program, she accepted a four-year appointment at the American University of Kuwait where she quickly rose from dean to president.

Building on a foundation of Fulbright fellowships
Tolmacheva’s first Fulbright Fellowship, in 1996, took her to teach at the former Kyrgyz-American Faculty, then part of the national university, now the independent American University of Central Asia in Bishkek, Kyrgyzstan.

“I was specifically invited there to teach World Civilizations as the Kyrgyz Republic was reforming its previously Soviet-style higher education. Participation in this exciting transition made me an enthusiast of international academic engagement, both on personal and institutional levels,” she said.

Her second Fulbright Fellowship was to teach at the National Aviation University in Kiev, Ukraine, in 2012. She now regularly receives invitations to visit and consult for higher-education institutions across the region that want to build American-model liberal-arts curricula and to adopt international standards of learning outcomes in their general-education programs.

In addition to aiding curriculum development at KIMEP and other nearby universities, she hopes to contribute to creation and monitoring of an assessment program and to share U.S. “best practices” in teaching and assessment to help faculty and administrators achieve their institutional goals and objectives.

‘Old country, young nation’
KIMEP created the China and Central Asian Studies Center, where Tolmacheva is affiliated, in 2010 “in response to the national need and to infuse state-of-the art research into teaching and citizenship efforts,” she said. “My Fulbright project will contribute to the existing undergraduate and graduate programs and add the American scholarly perspective to the international wealth of KIMEP faculty with European and East Asian advanced-degree training,” she said.

“Kazakhstan is an old country but a young nation. It successfully passed the quarter-century mark of post-Soviet independence, but the development of national historical consciousness takes longer,” she said. “The writing, research, restoration, and teaching of national history is a matter of national commitment, and the training of national historians and history teacher preparation have become priorities for many universities, including KIMEP and KasNU.”

Tomacheva anticipates the semester-long process will lead to presentations and information sharing with international audiences in Kazakhstan and neighboring Central Asian republics, as well as in the U.S., including at an upcoming WSU conference on higher education hosted by the College of Education. She also sees it as an opportunity to inspire her Kazakh colleagues and students to explore research and study options in the U.S., instead of more typical destinations in Europe, Japan, and, more recently, China.

A history of international outreach and service

She has also participated in WSU cooperative grant activities in Ukraine and Uzbekistan, and served as reviewer, field team visitor, research mentor and short-term instructor in programs sponsored by the Open Society Institute.

Tolmacheva has authored or co-authored three books, contributed chapters to six more books, published more than 50 articles and 90 book reviews in learned journals and encyclopedias and presented at numerous conferences around the world.

She is a member of the Central Eurasian Studies Society and an affiliate faculty member in the University of Washington’s Department of Near Eastern Languages and Cultures and in the UW Middle East Studies Center of the Jackson School of International Studies.

Fulbright programs operate in more than 155 countries, sending American faculty members, scholars and professionals abroad to lecture and/or conduct research for up to one year to increase mutual understanding across the globe.

Top image: Tolmacheva relaxes over tea in a café in Almaty, Kazakhstan.