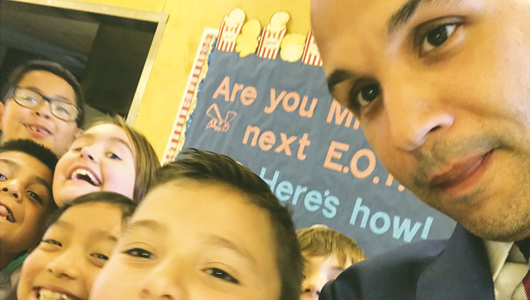 Damien Pattenaude went back to his old school in Renton when there was a need. Now he wants to see even more kids return to Renton classrooms as teachers, just as he did.

It has become an even more urgent concern for Pattenaude (English ’99, education ’05 MA, ’16 EdD) now that he is superintendent of the growing Renton School District. Like other school administrators across Washington and the country, he faces a teacher shortage, especially in special education, math, and sciences. Schools also need more diversity among teachers, to better represent the state’s changing population.

Although teacher shortages are not new, the problem is accelerating and becoming more visible. Teachers striking for better pay in states such as Arizona, Oklahoma, and West Virginia have brought attention to just one disincentive to becoming or staying a teacher.

In Washington state, schools will need thousands of new teachers in the coming years due to retirement, attrition, reduced class sizes, all-day kindergarten, a booming economy, and other factors. In the 2016–17 school year, 85 percent of Washington principals could not find fully-certificated teachers to fill all their teacher openings.

School leaders like Pattenaude, faculty and students at Washington State University, and state education leaders are bringing their creativity and energy to the problem. Programs like WSU’s Alhadeff Future Teachers of Color can help breach the diversity gap in schools, too.

A teacher shortage crisis was not on the mind of a younger Pattenaude, though. He attended Renton elementary, middle, and high schools, and, like many future educators, had a teacher who inspired him. In his case, Rick Comer ’86, an African-American math teacher and basketball coach who is retiring this year, “had a really profound impact on me, how he just was a great leader and mentor,” says Pattenaude, who is also African American.

He also got an early look at the teaching profession as a teenager. “We had a Teacher Academy at Renton High School, where we were guaranteed that if we went through the academy and got our teacher certificate, we could come back and get an interview. So that had always been in the back of my mind,” says Pattenaude. The Renton School District’s Teacher Academy began in the 1990s and it reflects the “grow your own” approach, one way to bring young teachers back to their communities.

After graduating from WSU, where he was also part of a future teachers of color program, Pattenaude eventually taught history in Kent, then received his master’s degree and principal certification, followed some time later by his doctorate. He became assistant principal at Hazen High School in Renton, principal at Renton High School, and superintendent in 2017.

In a room next to the Hazen High School library, the latest members of the Renton School District Teacher Academy concentrate in silence on an exam. It’s an optional test to receive certification as a paraprofessional who can work in the school system. For those seniors who pass the test, it could provide an opportunity to work in the schools, maybe even while they get their teaching degrees.

In the hushed library outside, Pattenaude joins Carla Smith, a vivacious teacher for 30 years in Renton and instructor of the Teacher Academy. They know each other well, since Smith taught Pattenaude in a Renton High School business law class in the 1990s. Now Pattenaude oversees her leadership of the academy. “It’s critical to have the teacher leader who’s helping to recruit the kids. How do we show them that it’s a meaningful career, a very rewarding career?” he says.

When she talks about the Teacher Academy, Smith’s voice rises. “It’s an amazing way to test drive a profession,” she says. “Even if they decide teaching is not for them, they’re going to be greater people, they’re going to be more informed voters. They’re going to understand and appreciate their children’s teachers and the stresses that a teacher has on the not-so-good days.”

And hopefully some of them will become teachers. The stresses of being a teacher, though, certainly have contributed to the huge shortage. In Washington state, 97 percent of school human resource directors say they are struggling or in crisis, and 74 percent say it is getting worse.

Nationally there could be a shortfall of over 100,000 teachers next year, according to the Learning Policy Institute, an educational research think tank. The institute also found that teacher education enrollment dropped by 35 percent between 2009 and 2014. Meanwhile, nearly 8 percent of the teaching workforce leaves the profession every year, most often before retirement age.

There’s also a need for a more diverse group of teachers. In Washington, one in ten teachers are people of color, while nearly half their students are from diverse backgrounds.

WSU education professor Tariq Akmal (English ’88, education ’96 MA, ’97 PhD) says diversifying the teacher workforce is one effective strategy to narrow Washington’s opportunity gap. Akmal is chair of the Department of Teaching and Learning in WSU’s College of Education and a former history teacher. Since he grew up in Pakistan, he understands the value of cultural exposure for all students.

Leaning forward in his sun-dappled office in Cleveland Hall, Akmal has a friendly smile, but his tone turns serious when he talks about the profound need for teachers, particularly those from a variety of backgrounds and experiences. In addition to a need for teachers of diverse backgrounds, Akmal says special education is consistently the top vacancy, closely followed by a need for more teachers with English language learning (ELL), math, and science backgrounds, particularly in physics and chemistry.

The reasons for a lack of teachers in the state are varied and complex. They include: full-day kindergarten, more K–3 class size reduction, increased retirements of Baby Boomer educators, more students, fewer college graduates in teacher preparation programs, new teachers leaving the profession early, limited reciprocity since Washington only accepts certification from three other states, and lack of availability for alternative teacher certification routes.

“Compensation is always a true reality. It’s not to be dismissed,” he says. “In a state that’s booming economically like ours, especially in the Puget Sound, young people in particular have lots of opportunities to do something different with their math degree, or their other degree of any kind.”

Reykdal notes that the legislature made a significant investment this year in starting teacher salary, which increased to a minimum of $41,000. While that salary may draw in some new teachers, that’s still not enough for many young, talented college graduates when there are other more lucrative opportunities in a growing economy.