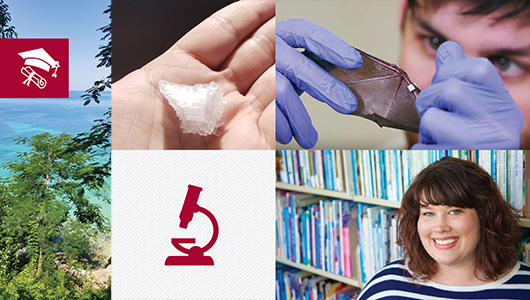 Alyssa Sperry’s research for her University Scholars Honors thesis on the history of salt in Jamaica earned her the Library Research Excellence Award for 2018. It also changed her life.

The library research award is designed to recognize students who excel in using the library and its rich resources. Sperry, who graduated from WSU Vancouver in May with a bachelor’s degree in anthropology and a minor in history, used the library exceptionally well—and went far beyond it.

Drawing on a vast array of resources, her paper, “The Covenant of Salt: The History of Salt Production and Consumption in Jamaica,” is groundbreaking. Sperry demonstrated not only that salt production was a lucrative industry in Jamaica, but also that “the production of salt was directly implicated in the sweat and tears of the Atlantic world,” she said.

Salt was essential to preserve the food that was eaten by sailing crews and the enslaved Africans they were transporting to the Caribbean sugar plantations, and therefore was key to maintaining the slave trade. In this way, Sperry wrote, “Salt also enabled colonial expansion and the development of the global economy.”

Sperry’s work is already getting significant academic recognition. She was invited to speak at the Second International Congress on the Anthropology of Salt in Mexico. With her professor of history, Candice Goucher, she is co-writing an article about salt for the Journal of World History as well as a book chapter for the University of Alabama Press.

In the fall, she will start graduate school at the University of Oregon on a full scholarship. She will enter the university’s International Studies program, with a food studies focus.

“I knew I wanted to do research in the food industry, but I didn’t know how it would look,” Sperry said. “This has changed my entire life.”

Benefits beyond the lab

Sperry is hardly the only undergraduate to have the course of her life altered by research experiences as an undergraduate at WSU Vancouver. Consider Beija Villalpando. She was an undergraduate researcher in the hearing research lab of Associate Professor Allison Coffin. When she graduated in 2016, she was hired as lab manager. This year, she is leaving to pursue her M.D. at Mayo Clinic School of Medicine in Minnesota.

Or consider Alex Nevue. He worked in Christine Portfors’s neuroscience lab doing hearing research on bats. Originally, he thought he wanted to become a doctor. But in doing research, he discovered the excitement and pursuit of knowledge he craved. He graduated in 2015 and continued as a research technician in the Portfors lab. This year, he began working toward his Ph.D. at Oregon Health & Science University, training for a career in research and teaching.

Success stories abound. “My colleagues in the sciences all use undergraduate researchers,” Coffin said. Although humanities professors may not have labs to staff, meaning that opportunities may be fewer, Sperry’s story shows that research can be rewarding for enterprising majors in any field.

“Research is an important selling point for WSU Vancouver,” said Portfors, who is associate vice chancellor for research and graduate education, as well as a professor. “We are a top research institution, but we’re small, and that’s unique. That means the majority of professors teaching are nationally and internationally known researchers. There is more opportunity to do research because it’s a small campus and students know their professors.”

“If students are interested in research, they should get that opportunity, and they should be treated as professional scientists at the level appropriate to them,” Coffin said. “We start slow and do lot of training. I love having the students’ energy and enthusiasm in the lab, and it energizes me too. They remind me how fun science is.”

Sometimes professors identify students in their classes who are good prospects for research assistance, but more often students take the initiative to find a professor with whom they want to work. That was the case with Sperry.

With a background in both the culinary arts and nutritional therapy, she was interested in the role of salt in the body and its cultural significance with food. Through her college classes, she became interested in Goucher’s studies of Caribbean food, and in a geology class she became ever more curious about the difference between sea salt and rock salt. Those interests came together for her honors thesis, in which she sought to learn whether Jamaica produced salt between the 15th and 19th centuries, as did other Caribbean islands, and what role Jamaican salt might have played in colonial expansion.

Coffin heard about one student, Robby Boney, from the Admissions Office, which had been impressed that Boney knew even before starting college that he was interested in hearing research and computer science. “He was with me four years,” Coffin said. “As a result, he has been published—he was the author on one paper, has presented at major conferences, and helped launch a new project I just got a small grant for. Without his computer science expertise, that project would not have been possible.”

Students can volunteer to work in a lab, sign up for credit, and sometimes get paid on a part-time basis or obtain funds some other way. Sperry, for example, was able to travel to Jamaica for her research because of small grants she obtained with the support of her history professors.

Money depends on grant funds available, of course, and with grants so competitive, not many professors can offer salaries. For students who need a job, that can make it difficult to find time to participate in research. But for those who can make the commitment, there are plenty of other rewards.

“For science students, it’s working with state-of-the-art equipment and new technologies, and gaining hands-on experience doing experiments,” Portfors said. “These technologies and skills can help you get into professional schools or get a job. And critical thinking in any research position can help you get a job.” Research experience also helps improve communication skills, leadership, time management and teamwork.

One of the biggest benefits is confidence building. Through research, students discover that they too can make a contribution to the field, and that others will look up to them. Coffin, who always has three or four undergraduates working in her lab, explained, “Students go from learning to do their first experiments to being pretty independent in the lab and coming up with new ideas.”

Sperry’s work, for example, is likely to alter the understanding of Atlantic history. In nominating her for the award, Goucher said, “I believe this work will completely alter the ways in which historians not only incorporate the history of salt in their economic understanding of the Atlantic era’s other commodity histories, but future scholars will realize (as Alyssa’s research has unearthed) that Caribbean salt production was fundamental to the narrative of maritime mobility and plantation slavery in the Atlantic world.”

Originally posted at WSU Vancouver and published in Northwest Crimson and Gray.