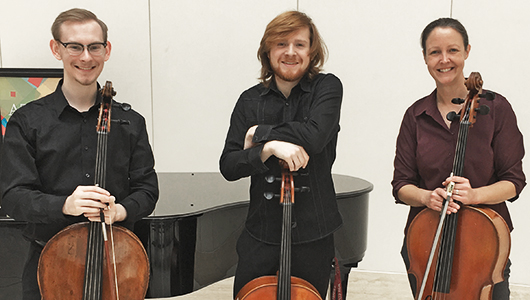 Fay is a junior music major studying cello performance, and Shaw is a sophomore music major studying music composition, cello and guitar. Boden is an associate professor in the WSU School of Music where she teaches cello, bass, music theory and coordinates the chamber music program.

“The experience was incredible. We connected with some really wonderful musicians and made them all honorary Cougar Celli!,” said Boden.

The invitation was extended to the trio as a result of their participation in the InterHarmony International Music Festival this past summer in Aqcui Terme, Italy, where Ruth Boden was on faculty, and Francis Fay and Gordon Shaw were students.

“Playing in one of the most iconic concert halls and receiving feedback from musicians outside WSU helps reinforce that we are world class musicians and students,” Boden said. She plans to continue seeking out collaborations with musicians around the world.

Carnegie Hall first opened its doors in 1891 and comprises three venues: Stern Auditorium / Perelman Stage, Zankel Hall, and Weill Recital Hall. Known as the most prestigious concert stage in the U.S., almost all of the leading classical music and, more recently, popular music performers since 1891 have performed there.