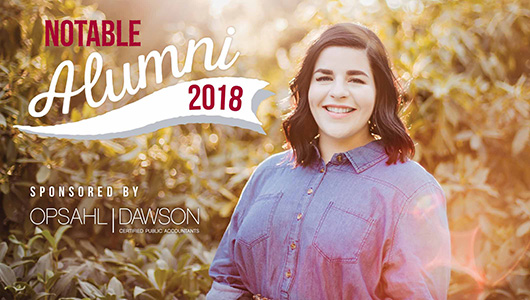 Ashlyn Salzman has packed a lot of experiences and accomplishments into her 25 years.

She has mentored young people (particularly young women), volunteered at the Cougar Food Pantry, with Cougs in the Community and advocated for WSU students at the Washington State Legislature. Salzman serves on a Young Alumni committee for WSU Vancouver and is on the board of the Clark College Alumni Association. She is a member of Leadership Clark County and an events volunteer for nonprofit fundraisers with We Plan It. The list goes on.

For everything she’s done and for her promising future, Salzman has received the 2018 WSU Vancouver Notable Alumni Award.

“That inspired me to get involved with local government,” she said. “It was really fun to see the impact we as students could make if we took interest in issues in Olympia.” For example, she and her counterparts from other WSU campuses promoted such issues as tuition reduction and the authorization of a WSU medical school. She also managed voter registration efforts on campus and organized Coug Day at the Capitol to engage other students with the legislature.

All of this prepared her exceptionally well for her current work as events manager at the Greater Vancouver Chamber of Commerce. “I have a high volume of work, and I really like to keep busy,” she said. “I like working with a lot of our area businesses, connecting them with resources that will make them successful, and resources we provide they maybe didn’t know about. It’s great to collaborate with many nonprofit and business leaders in our community.”

And although she doesn’t do advocacy herself, she helps the GVCC communicate its legislative agenda to the business community.

Before joining the GVCC, she worked for the Southwest Washington Contractors Association, another organization that helps Clark County businesses grow.

Committed to the Community

Salzman has lived in Vancouver since she was 15 years old. Her mother, Christi Hosking, was raising seven children on her own while attending college and working. Hosking graduated from WSU Vancouver in 2013 and is currently working on a master’s degree while serving as a paraeducator at a local high school. “She is a great role model,” Salzman said. “I always thought, if she can get straight As with all that she juggles, I should be able to!”

In 2015, Salzman received Honorable Mention for WSU Vancouver’s Distinguished Woman of the Year Award. She graduated from Leadership Clark County in 2016 and now serves on its recruitment and alumni committees. “She is so loyal and invested that if she is involved in anything—family, work, school, programs, events—she goes above and beyond to serve them, even after they are long completed,” wrote Vancouver business leader Erika Laws in nominating Salzman for the Notable Alumni Award.

Salzman gives a lot of credit to WSU Vancouver for her success. After transferring to WSU Pullman following two years at Clark College, she decided to switch to the Vancouver campus, where her classes, teachers and fellow students gave her the confidence and motivation to get involved in student government.

“Without WSU Vancouver, I truly would not be the person I am today,” she said.

“I like how small, intimate and connected to the community WSU Vancouver is,” she said. “Being in that environment and having teachers who have relationships with business leaders taught me how generous our community is, and how interconnected everything is. Whether you want to work in business, nonprofits or government, they all depend on our education pipeline.”

Long term, she hopes to take on an advocacy role—and makes it clear that it is policy, not politics, that interests her. “I intend to use any small success I obtain in my lifetime to give back to WSU, to Vancouver, and to women younger than me who need mentorship to reach their fullest potential,” she said.

The WSU Vancouver Notable Alumni Award honors alumni who have made significant contributions to society, and whose accomplishments, affiliations, careers and/or community service reflect WSU Vancouver’s legacy of excellence. The nomination process begins in the spring, and a committee scores the nominations and chooses one notable alumna/alumnus for the year. The award began in 2014 with 25 notable alumni selected as part of WSU Vancouver’s 25th anniversary celebration.

Originally posted at WSU Vancouver and published in Northwest Crimson and Gray.