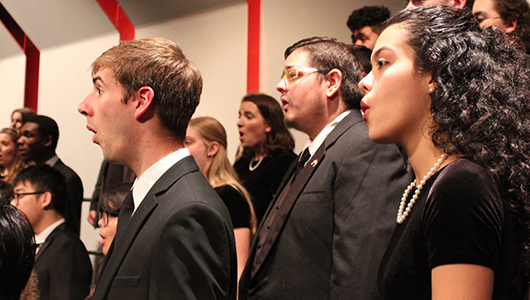 The concert included seasonal favorites and concluded with Leroy Anderson’s Christmas Festival, featuring all of the performing groups.

The WSU Madrigal Singers, performing in English Renaissance costumes and led by professor Lori Wiest, director of choral activities, performed the traditional “Ukrainian Carol of the Bells,” the German carol “Es ist ein Ros Entsprungen,” the Welsh tune “Deck the Hall,” followed by “Softly” by British composer Will Todd. They continued with “My Dancing Day” by Alice Parker and Robert Shaw, and concluded with the ever-popular traditional carol “We Wish You A Merry Christmas.”

The WSU Concert Choir, also conducted by Wiest, performed “Trinity Te Deum” by Eriks Ešenvalds, featuring School of Music faculty on trumpets, trombones, organ, piano and timpani. “Jingle Bells,” an arrangement by David Willcocks of the popular song, followed by a traditional Canadian carol, “Huron Carol,” arranged by Dan Forrest. They will finished with “Here We Come A‑Caroling” arranged by Josh Sparkman. The pianist for the Concert Choir is Miles Sutton, a graduate student pursuing a master’s degree in music.

The WSU Symphony Orchestra is under the direction of Danh Pham.

Provided by WSU School of Music