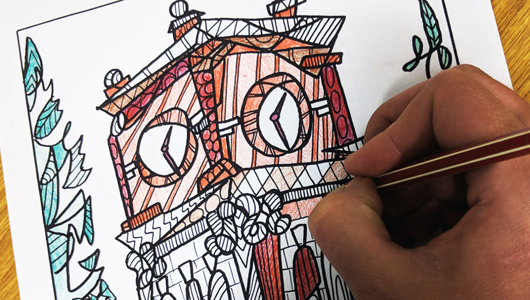 Coloring isn’t just for kids any more: many mental health professionals say it’s a good way for adults to destress.

Thanks to Seattle artist and 2005 fine arts grad Tarah Luke, WSU is now part of the landscape. Luke found her niche in the adult coloring book industry and drew an abstract version of the iconic Bryan Hall clock tower for her fellow Cougars and Cougs at heart everywhere.

Luke was profiled in the Washington State Magazine Summer 2016 issue: read the full story below and download the coloring page!

Download the coloring page (PDF) and give it a try.

(Dec 2019: Send your completed artwork to social.media@wsu.edu to possibly be featured in a @WSUPullman Facebook Album. Be sure to include your name and a short caption about your design.)

Tarah Luke felt like her hands would fall off after completing 120 pages in adult coloring books over five and a half weeks.

Luke ’05 didn’t color the pages, though. The Seattle-based artist designed and drew the images featured in the four books. The Eiffel Tower, a marching band, an octopus, and a movie camera are just a few examples from the series of themed volumes divided into places, music, animals, and inventions.

Last December, five out of the top ten print books sold on Amazon were coloring books. Major publishers are reporting tens of millions of sales of them through the end of last year. Adult coloring books can be found in most bookstores, craft stores, and sometimes the grocery checkout lane.

Luke didn’t immediately jump into the coloring book scene when it began to gain traction last spring, although she has been creating and selling art for years.

She got started while on a mission trip to Romania between community college and attending Washington State University. Luke had always enjoyed artistry, but hadn’t taken classes. When she finished a 120-foot mural on that trip, her path was clear.

“It was then that I realized that I had to do art. It’s in me—I’m fueled by it,” she says.

When she arrived at WSU, Luke changed her major from psychology to fine arts. She especially remembers learning a lot from her advisor and painting instructor Chris Pratt.

“I used to do nothing but realistic stuff, but he asked me if I had ever worked with just color and abstract. I did nothing but abstract for years after that,” says Luke.

After graduation, Luke continued to develop her artistic talents while working a series of other jobs in Seattle. About three years ago, she began to sell a lot of her abstract black-and-white line drawings online.

It was those images that inspired her father to suggest coloring books last August.

“I didn’t even know adult coloring books were a thing,” says Luke. “My dad said, ‘I think those drawings you sell a ton of would make amazing coloring book pages.’”

Her father’s company—Topics Entertainment—had never sold coloring books before, but Luke got right to work.

After settling on the four themes and the images, Luke drew pages every day.

“They take anywhere from an hour to three hours depending on the complexity of the image,” she says. “With these pictures, I do it all in one continuous motion. I find a way to abstract it in that flow.”

Luke says each drawing has some pattern that is unique to that drawing. For example, a drawing of a lion has African patterns. One of Luke’s favorites has a Mayan pattern.

The books went on sale last December. As with other adult coloring books, they tout the stress-relieving and meditative benefits of coloring.

There are some proven advantages. A 2005 study by Nancy Curry and psychologist Tim Kasser found that coloring mandalas reduced anxiety in students, unlike free-form doodling.

Luke thinks the adult coloring book craze offers a physical release from the digital age. “There’s so much screen time on cellphones, iPads, and computers,” she says. “People want to find some escape where they’re not being bombarded by technology and information.”

She found the coloring books to be a welcome stress relief even when she was drawing her own. Luke says she colored in others’ books last fall and enjoyed the distraction.

“You can disconnect, but you’re not so disconnected that your mind wanders,” she says.

For now, Luke has commissions to do other work, such as a 30-foot mural in a brewpub, but the coloring books still hold promise.

“I think there are a lot of people who don’t even know about this trend yet,” she says. “It feels like it’s just amping up.”