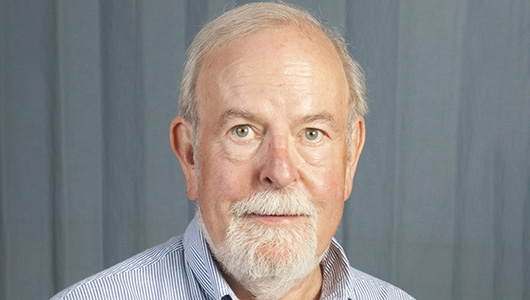 Kelvin Lynn, Regents Professor with a dual appointment in the Department of Physics and Astronomy and School of Mechanical and Materials Engineering, has received a $200,000 award from the U.S. Department of Energy Solar Energy Technologies Office to advance solar research and development.

Lynn, who is also the Boeing Chair for Advanced Materials, and his group are working to improve cadmium telluride (CdTe) solar technology. Silicon solar cells represent 90 percent of the solar cell market, but CdTe solar cells offer a low‑cost alternative. They have the lowest carbon footprint in solar technology and perform better than silicon in real world conditions, including in hot, humid weather and under low light.

Researchers have been working to improve the efficiency of the technology, but have been unable to reach its predicted limits. Two years ago, Lynn’s group made a key improvement in the technology by carefully adding a small number of phosphorus atoms during the manufacturing process, improving its open‑circuit voltage, or the maximum voltage available from the solar cell. The researchers are leaders in crystal growth research and technology and their crystal growth and doping methods have led to higher quality materials for detectors and photovoltaics.

As part of the new project, the researchers will use similar doping techniques to add small metal particles to cadmium selenium telluride (CdSeTe) crystals to improve absorption. The researchers will grow crystals doped with indium, a soft silver-white metal, with the aim of creating high efficiency cells.

The project is part of the Energy Department’s FY2018 Solar Energy Technologies Office funding program, which invests in new projects to lower solar electricity costs and to support a growing solar workforce.

Lynn is also part of a group of researchers who have received a $1.88 million grant to better understand gallium oxide, an important semiconductor that can be used for high‑power electronic applications.

Led by the University of Utah and funded by the Air Force Office of Science Research, the work could lead to more energy efficient power converters and much improved electrically powered systems for trains, buses, and even airplanes. The researchers believe that gallium oxide could make a better semiconductor than those used in modern electronics because it doesn’t produce excessive heat or burn up at high voltages, which would allow electronics to work at higher voltages. The WSU researchers will be growing and characterizing the gallium oxide crystals.

By Tina Hilding for WSU Insider