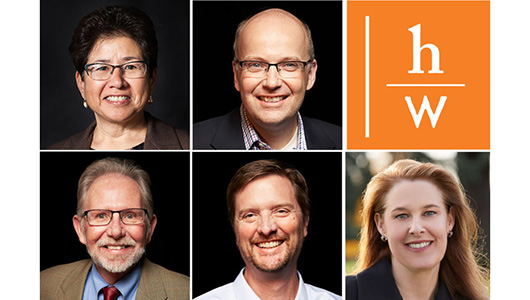 Five WSU College of Arts and Sciences faculty will be speaking around the state about their research in a new partnership between the Thomas S. Foley Institute of Public Policy and Public Service and Humanities Washington, a nonprofit that aims to foster thoughtful conversation and critical thinking.

For the next two years, WSU’s “Foley Fellows” will be among more than 30 speakers that provide free public presentations on science, politics, music, philosophy, spiritual traditions and more in dozens of communities throughout Washington.

The collaboration is the brainchild of Cornell Clayton, director of the Foley Institute and himself a former member of the Humanities Washington speakers bureau.

“It just fits so nicely with the Foley Institute mission,” Clayton said. In addition to engaging students in public service, the institute educates students and the public on public affairs and supports academic research on public policy and democratic institutions.

Foley Fellows will be branded separately from the other speakers and the institute will pay two‑thirds of their $300‑per‑appearance stipends. Travel expenses are picked up by hosting institutions, which include libraries, colleges, museums and cultural centers.

The Foley Fellows and their topics are:

You can learn more about the partnership at the Foley Institute website.