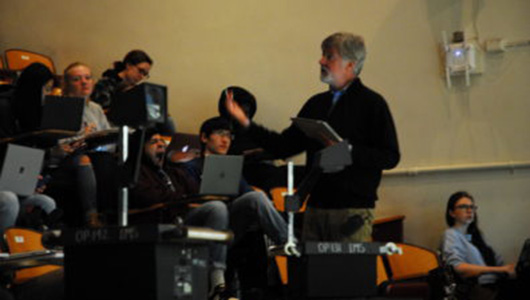 A duck gliding across the surface of a lake often appears to be doing so with ease, but look below the surface and you’ll see the frenetic paddling required to make it happen.

If you think of college as the lake, and students as the ducks, you may find students experiencing the same phenomenon.

Paul Buckley, clinical associate professor in chemistry, recognized this comparison  after taking part in the LIFT Fellowship’s first cohort in December of 2016.

“Your peers and professors are all struggling,” he said, “and that’s okay.” Since starting the LIFT Fellowship, Buckley has implemented many of LIFT’s principles into his teachings including his favorite module: growth mindset.

Buckley himself failed chemistry exams as an undergraduate, but that didn’t stop him from pursuing what he loves. His passion for chemistry stems from his love of its matter-of-fact explanations.

“It explains how the world works on an atomic and molecular level,” he said. “I find that very satisfying. When things are explained at those levels, I think, ‘that’s cool, now I get it.’”

His passion flows into the classroom where his education research is focused on helping students successfully make it through chemistry. This focus on student improvement is what drove him to apply for the LIFT program.

A study by The National Academies of Sciences, Engineering and Medicine showed that not only are the interventions used in the LIFT curriculum related to college success, but they generate the largest benefit for under-represented student groups who are most at risk for academic failure.

Buckley learned through the LIFT Fellowship that, in addition to recognizing the struggles of students, students can improve their intelligence by pushing themselves and becoming stronger.

Another module, concept mapping, helps students connect concepts, something Buckley finds to be necessarily in chemistry.

“In chemistry, most people can do the math, solve the numeric chemistry problems, that’s not the biggest difficulty,” he said. “When a test has half conceptual problems and half math problems, they are going to struggle on the conceptual aspect. I’m sure I was like that too. The key is to improve conceptual understanding.”

Though he was concerned implementing new techniques into his teaching through the LIFT program could be time-consuming or difficult, he quickly found those concerns to be completely unfounded. Buckley discovered that implementations, including simple exercises such as finding other students with the same birthday, promote social belonging. Research has proven small acts of social connection like this link to better performance.

Although the program hasn’t completely changed his teaching style, it’s given him a new perspective on his students.

“It made me think of my students beyond the classroom,” he said. “It expands your horizons and how you think about teaching and your role in the classroom.”

Top image: Buckley in the classroom at WSU Pullman.

By Katie Shadler for the Office of the Provost