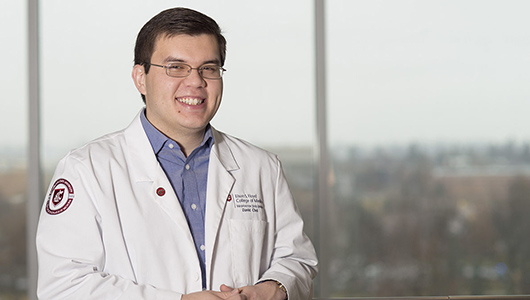 Medical students at Washington State University have a national voice, thanks to David Choi (’16 biology).

A devoted Coug who graduated from WSU Vancouver and is now enrolled at the WSU Elson S. Floyd College of Medicine, Choi was elected last spring to represent students in nine states as western region chair of the Association of American Medical Colleges’ student branch.

AAMC represents all 152 accredited medical schools in the nation and their 89,000 medical students, plus VA medical centers, major teaching hospitals and health systems and academic societies.

Choi said he got involved in AAMC’s Organization of Student Representatives as a way to participate in the ongoing work of building the College of Medicine. He’s had a longtime interest in policy and was involved in student government in Vancouver, including a stint as president of the campus.

He chose the Elson S. Floyd College of Medicine because he feels like it does a good job of taking care of students and focusing on patients, “and trying to minimize the stuff in between that,” Choi said. “For me that was powerful.”

John Tomkowiak, founding dean of the college, said, “It is a proud moment for the Elson S. Floyd College of Medicine to have David Choi represent the college with the AAMC. This would be an honor for any medical student to be chosen by their peers for such an important role, but is especially notable given that we are a new medical school. Gaining such a prominent voice in academic medicine at this early stage says a great deal about the leadership and trust that David and all of our students are establishing with their regional peers and important organizations like the AAMC.”

“I didn’t think I could go to college,” he said. “My parents are awesome, very supportive, but financially we had some rough times.”

A state College Bound Scholarship changed that trajectory, and he majored in biology at WSU Vancouver. He’s considering the field of psychiatry because of a longstanding interest in mental health.

His goal in medicine is to serve, whether that’s service to under‑represented communities as a doctor; to WSU as a preceptor; or to the state that helped him get to medical school, in health care policy.

“I want to set myself up in ways I can help empower those around me,” he said, apologizing that “it sounds so cheesy.”

AAMC’s student branch addresses big issues in medical education, Choi said. For instance, he’d like to see more emphasis on wellness, citing statistics on the incidence of anxiety and depression among medical students.

Right now, however, his main focus is medical school.

“I’m thankful I’m able to do this,” he said of his position in AAMC. But mostly, “I just want to make sure I’m a good health care provider.”