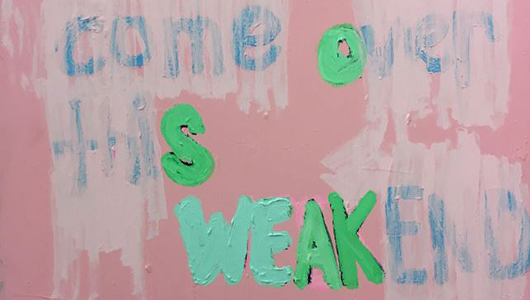 When looking for art on campus, you might think only of the crimson cube of the recently opened Schnitzer art museum. But did you know there are several galleries in the Fine Arts building where WSU students and professors often exhibit their work?

Recently, David Janssen Jr., an art instructor with a specialty in 2D foundations, displayed a collection of his paintings entitled “Between Us” in Gallery 2.

“I thought about that space between my work and people who are going to engage with that,” Janssen said.

Each painting took Janssen a different amount of time to produce, he said.

“There’s a few of them in there that took maybe a couple of hours,” he said, “and then there’s ones that I’ve been working on for, like, months.”

He said depending on how each painting came together, they morphed into new things. In some of the pieces, there was text behind text, layers upon layers of paint and different eye-catching color combinations.

“It’s about, like, this sort of competing voice or different statements that have been repeated over time,” Janssen said. “Sometimes when I’m covering up, you know, different layers and things, it feels to me like sort of giving forgiveness to that statement and then getting to say something else instead.”

Janssen’s work allows him to backtrack and paste over things that people said or texted, spray-painting or brushing over the statements with new text or new ideas. Janssen always planned to merge paint and text, he said.

“Paintings always felt like something that I am almost, like, in a marriage with all the time,” Janssen said, in a joking tone. “And graphic design always felt like the person I always snuck out of the house to go see that painting doesn’t know about, but then I get to talk to painting about that and everything’s okay.”

Megan Culbertson, a graduate student and an instructor of printmaking at WSU, said she enjoyed the gallery.

“It implies a conversation,” she said, “not only between two people in a texting conversation, but also … an intimate conversation with the audience.”

Culbertson compared “Between Us” to an earlier show by Janssen.

“I think that, ultimately, this is a much quieter show,” Culbertson said. “The conversations feel a little bit more private. It feels [like] more of an in-depth exploration of what it means to be intimate in a contemporary life.”

Culbertson, who works with text in her artwork regularly, thought Janssen’s decision to use bright colors and text together was unique and brought a contemporary angle to text in art. In addition to different fonts and texts, paint was a good choice for the collection.

“Paint as a medium, because it has so much history involved with it, at this point, I think it is used primarily for its direct application and intimacy with the artist,” she said. “It has a direct hand and implies a personal connection.”

Every choice in creating the pieces was purposeful, but the process of each painting changed and transformed into something Janssen wasn’t planning for.

“I never really quite know where these things are going to go,” Janssen said. “And I think that’s the biggest thing, too … I’m really in love with the process of doing it.”

Originally posted by Sarina Sharpe for The Daily Evergreen