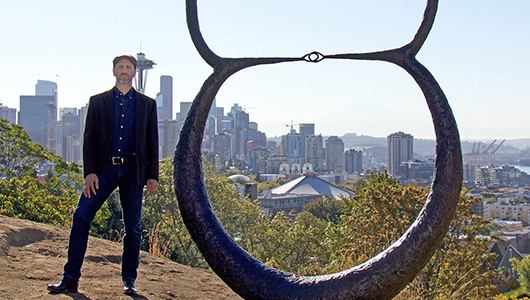 WSU alumnus Michael Schultheis finds dynamic synergies between the languages of mathematics and art. He employs analytical formula within his luminous paintings and sculptures. His works bend mathematical precision into imperfect visions, creating room for metaphors and storytelling.

Raised on a rural family farm near the Snake River in southeast Washington, Schultheis was awarded a bachelor’s degree in honors economics from WSU in 1990. His art has been featured in more than 60 solo exhibitions in the United States. It is included in public collections such as the National Academy of Sciences, Washington, D.C., and U.S. Embassies in Greece and Switzerland. Schultheis has lectured widely on ‘Analytical Expressionism’ a term he uses to describe his practice at the intersection of mathematics, science, technology and the visual arts.

The art exhibition, “Michael Schultheis: Venn Pirouettes,” will be presented Jan. 15–June 29 in WSU Jordan Schnitzer Museum of Art. The exhibition is located in the Wright/Harmon Gallery and is free and open to the public.