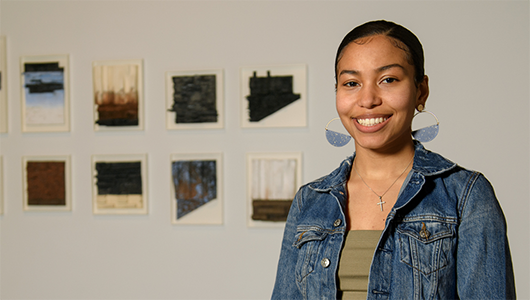 WSU senior Sidney Murphy, curator of a special six-week exhibit at WSU’s Jordan Schnitzer Museum of Art, sees art as a path to a more honest, open, and liberating future.

Standing in front of the four panels of Myriads, Only by Dark by Julie Mehretu, Murphy says of the Ethiopian-American artist, “Mehretu focuses a lot on topology, maps, the connections we have between places—that’s my interpretation. This idea of place is messy, of where we come from, really messy.” She tosses off a small laugh. “You can’t really follow one line.”

The panels are a thrilling cartographic fantasy of lines in motion, of connection, intersection, countercurrent, filled with clouds of hatching that might be mountaintops or black-winged angels in flight.

An inability to follow a single line is not something that could be said of Murphy herself. She caught scent of the museum world while very young and nothing has deterred her from where she’s standing right now, showing off the first exhibit she’s curated, in the Jordan Schnitzer Museum of Art at Washington State University.

Preparing herself for a career in museum work, Murphy is giving the social sciences a one-two punch, double majoring in history and anthropology. She’s got a seat in, and probably a full‑ride fellowship to, the University of Illinois, Chicago’s graduate program in museum studies.

That whole undeterred thing runs in her family.

Murphy’s mother, Mia, was a black woman in a civil engineering program when Sidney was born. “She tells me I could have easily gone into engineering: ‘I was reading you all the textbooks!’” Her mother was also hearing people ask, What are you doing here? You’ll never amount to anything.

Despite the blunt aggressions, the elder Murphy kept with the program and has had a career that’s included working with NASA and advocating for women in science, technology, engineering, and math‑related fields—as well as the arts.

Murphy says her mother used art and creativity as tools to teach her daughter to think, to express herself, to analyze ideas and, in turn, to teach others to express and memorialize themselves. That thought, of memorialization, is what lingers in the mind after moving on from the Mehretu panels: the handprints in the midst of all the flying clouds of hatching, like there was something 40,000 years old hanging on the wall of the museum.

Murphy’s grandfather was pretty indomitable, as well. Among other things, he was a painter (as was his wife) and a black community activist in the Denver area. Despite his home being bombed when Sidney’s mother was young, he stood his ground and non‑violently did what he could to protect his mixed‑ethnicity family and his community.

Moving on to a sculpture by Kenya‑born artist Wangechi Mutu, Murphy says the piece sometimes results in visceral reactions by visitors. The sculpture is a pair of legs made of leather, thick and heavily sutured. Murphy says this is Wangechi commenting on images of the female body.

“What do those [pop culture] images teach young women, how does it influence their expectations of their own bodies?” she asks, concern etching her face.

The piece evokes images of so‑called Venus Hottentot done by the eighteenth-century engraver Georges Cuvier. The Hottentot, a derogatory term for the Khoi people of the Kalahari and surrounding southern African regions, were culturally obliterated by colonial forces. Sarah Baartman, the Khoi woman who was captured, renamed, brought to England and paraded around the country as part of a “freak” show because she had an ample, curvy butt and thighs. Her body was used to justify theories of so‑called scientific racism.

“Wangechi had a collage series on measuring skulls, ‘scientific’ racism, things that were never really talked about in high school,” Murphy says. “But if you come into her space, you are able to have a history lesson just looking at her artwork—which I think is really cool.

“You can sometimes teach students with art easier than you can with textbooks,” she continues. “Instead of trying to explain what cultural roots are, they can see what that means. History is usually written by the victors, so you only get that one perspective, and we need that history, but art, poetry, and oral history supplement, expose and fill some of the gaps. Especially for women and people of color whose voices are not heard in those histories.”

Murphy says that art is also healing, especially when dealing with issues that make people “really uncomfortable,” like eugenics or fascism. “I think there’s a kind of guilt some people feel. I think art helps us move past that guilt into having conversations together and sharing experiences and changing the way we think about things and the way we treat people.”

Murphy says her father, Kevin Murphy (’92 Comm.), shaped her experience of the world in large and small ways. For one, it was his idea that she come to, as Sidney puts it, “the middle of nowhere” to explore the beauty of WSU Pullman and the surrounding region. Too, her dad’s love of art and culture made her realize the importance of community involvement. “He used to work for the WSU radio station,” she says. “He’d toss vinyl records out the window at students” in order to get them to listen to the radio.

Reflecting on all her family has given her, Murphy seems to want to extend that to the rest of the world. With an African-American mother and an Irish-American father, she says that “growing up I realized there are a lot of issues. My family has fought so hard to get me here, I feel I need to repay them in some way.”

This exhibit is a great start. It showcases the work of four black artists and was hung as part of WSU’s celebration of Black History Month. For Murphy, this show is a step on a path that leads into an unwritten future but is surely one in which she helps move museums beyond the display of mere artifacts—headdresses, regalia, beads and trinkets—and into a deeper understanding and appreciation of what African artists “want to show us and what they want us to show.”

Where artifacts disguise the fact that the objects being displayed were some individual’s, or some individual culture’s possessions, all with deeply personal significance, “I have to figure out ways to display objects in ways that give respect to cultures and peoples.

“Art allows us to show accurate representations of individuals and cultures,” she says and, at the same time, to address the troubles of past and present through conversation and education.

“Don’t fear the art,” Murphy says. “Come in. Look at it. Experience it. Be OK with whatever emotions come up, whatever experience it reminds you of, and be OK that there isn’t always an answer.”

By Brian Charles Clark for Washington State Magazine and the WSU.edu homepage.