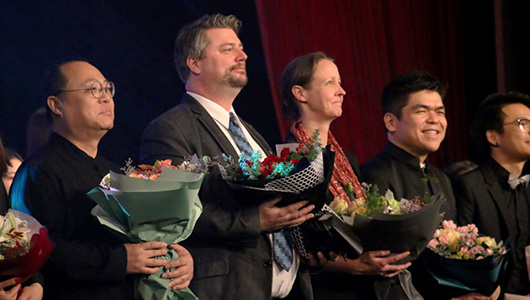 Danh Pham, director of WSU Bands and Orchestras, Ruth Boden, cellist and associate professor of music, and Dean Luethi, choral conductor and director of the School of Music, performed at Guangzhou University in Guangzhou, China, and worked with a number of Guangzhou‑area bands, orchestras and choirs composed of students from middle school through college levels.

Their trip was made possible by a grant Pham received from the WSU Center for Arts and Humanities for his project which takes WSU performers and pedagogues to Asia and vice versa.

“There is fabulous music being performed in Guangzhou and it was wonderful to witness it and take part in that music making,” Luethi said. “The students and faculty throughout the trip were very gracious, and we’re excited about continuing a relationship with them.”

The three faculty members were hosted in China by Zhongyun Luo, resident conductor of the Guangzhou University bands and orchestra.

Zhongyun Luo, whose English name is Jack Law, “is part of a new generation of conductors/composers/teachers in China,” Pham said. “He is regarded as one of the most active musicians in southern China, and many of his compositions, arrangements and translations of pedagogy text have been published by major companies in China and Hong Kong.”

The opportunity to engage with Chinese musicians of all ages—and with a musician of Law’s prominence and scholarship—was invaluable, Pham said.

Last month, Law came to WSU and for two weeks served as guest conductor-in-residence with both the WSU Symphonic Wind Ensemble and Symphony Orchestra. This was a part of Pham’s West Meets East project. While at WSU he also auditioned for a Teaching Assistant position to earn his Master of Arts in Music at WSU.

The WSU trio’s experience in China culminated in a performance at Guangzhou University with Pham conducting their bands and orchestra. Boden played a cello concerto with the orchestra as part of their New Year’s concert, and Luethi conducted the choir and orchestra in a combined piece.

During the final performance, Boden played a fantasy of Chinese folk songs with accompaniment by the Guangzhou University Symphony Orchestra.

“My first time visiting China was a wonderful experience,” Boden said. “Everyone we met was so warm, kind and generous—and the students were inquisitive and hardworking and had clear passion for their music and education. The Guangzhou University Symphony was great to work with, and I enjoyed the music making tremendously. I would love to see continued exchanges between them and our WSU students.”

Top photo: Pham, second from right, Boden, center, and Leuthi, second from left, after a performance with fellow musicians at Guangzhou University.