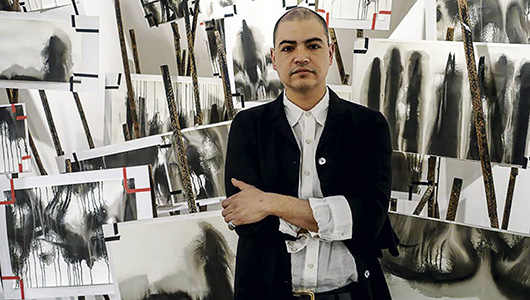 For artist Nathan Orosco (’02 MFA), the process of making art is an art in itself. From sculpting clays to melting bronze, “you’re collaborating with raw materials. You’re shaking hands with the past and the historic ways humans have traditionally dealt with those materials. And then I add in the content of my own personal identity.”

Cast bronze, fused glass, ceramics, textiles, wood, and other media take shape in Orosco’s art that speaks of his social, political, and cultural “anxieties,” as he calls them. He often addresses issues of ethnicity, economic disparity, social conflict, political protest, and cultural displacement, in an eclectic mix of genres. Now mainly a sculptor and installation artist, he also explores the idea of cultural borders—crossing, shifting, and blurring them.

Whether he’s out searching for vinyl records, at school teaching drawing, or in his living room playing guitar, “I get infatuated by the process of it,” says Orosco

As a Mexican-American with Aztec, Mayan, and Native American in his bloodline, Orosco knows borders. Born and raised in Odessa, Texas, he saw early on how the human body here was viewed merely as a tool for oil industry profit. As a teen, he worked in his father’s diesel mechanic shop repairing oil trucks and cleaning field equipment. He built lowriders and drove around listening to grunge and hip hop. And he drew a lot, and not just to impress friends.

When Orosco won a local poster design contest for a Hispanic heritage event, “it created a spark,” he says. By age 16, he knew art was it. A high school art course kept him from dropping out. And an art contest best of show award got him into college—the first in his family to earn a degree. He enrolled at the University of Texas of the Permian Basin (UTPB), thanks to encouragement from one of the judges, an art professor there. Chris Stanley (’91 MFA) teaches at UTPB and he pointed Orosco northwestward.

A full scholarship and teaching assistant post with the WSU Department of Fine Arts gave him the space “to be nurtured and grow, and have complete creative freedom,” says Orosco. Jack Dollhausen, now professor emeritus of sculpture, influenced his work politically. And Ann Christenson, emeritus professor in ceramics, “urged this brown-skinned kid to say something about his identity and culture,” he says. She also let Orosco choose WSU’s 2001 visiting artist: James Luna, an internationally known performance and installation artist of Mexican and Native American descent, who “showed that I could make a career with my art.”

When Orosco graduated, he took Dollhausen’s place during the professor’s year-long sabbatical. Then, after three years teaching at Eastern Washington University, he resigned in 2006. “I didn’t want to get stuck. I wanted to live my life.” He returned to Odessa for the next two years, doing dirt construction. He also did land art, photography, and video art, while traveling abroad and throughout the West.

He heard about a full-time job teaching sculpture at Mt. Hood Community College. By then, he had had several exhibits of his work, from Texas to Washington. In recent years, he has shown at Blackfish Gallery and Ford Gallery in Portland.

He teaches his students, mostly working-class nonartists, that “every human is made to create something that’s never existed before, and how important that is,” he says. “Our bodies haven’t changed in thousands of years; our wrists still pivot and our knees still bend. So we’re designed to pick up bronze or clay and play with it and think about it.”

Orosco learns from his students, too. “For them, sculpture class is like an experimental laboratory. When they accidentally drip or break something, or forget to do some part of the process, the unexpected often happens. I’ve learned so many tricks and interesting effects from my students. I firmly believe that teaching art is a very important part of the art-making process.”

Like working with clay or playing guitar, for Orosco it’s also an art.