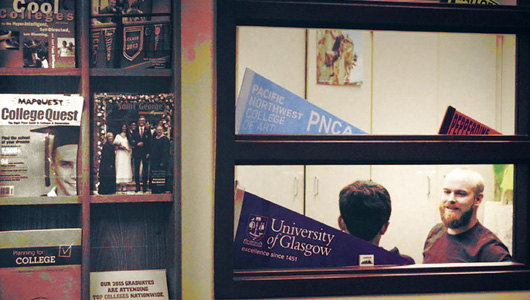 “The fact that I’m a teacher now is just the greatest turn of events—my old high school teachers would be shocked,” says Kerry Clark (’11 Hum., ’14 MA English). He’s sharing his improbable story as we tour Saint George’s School, a private K–12 preparatory institute nestled in the woods along the Little Spokane River.

Clark teaches English and history classes for the International Baccalaureate Diploma program at Saint George’s and is also a college counselor. On top of that, he coaches soccer, basketball, and baseball. The notable achievement is made more impressive when you learn that he never graduated from high school.

An only child, Clark grew up in Centralia, raised by a single mother with a minimum wage job. Regina Clark also served as a Navy reservist, spending two weeks in training every year plus one weekend each month.

Life went fairly smoothly for the two of them, he says, until the September 11, 2001, attack on the United States. “Within six months, my mom left for her first military tour aboard the U.S.S. Nimitz. I was 14 at the time and pretty much left on my own. Understandably, I made some bad choices and hung out with seniors who encouraged me to throw parties.”

He also struggled during her 2003 tour to Kuwait during Operation Desert Storm but felt he had matured when she was called up again in 2005.

“She had a choice whether to go or not,” he says. “I was supportive, but we didn’t know she was going to Fallujah, which was the most dangerous place in Iraq at the time.”

The deadly ambush came on June 23 as Clark and her fellow soldiers were returning home in a cargo truck after a long day of inspections at a dangerous checkpoint. The suicide bomber had waited along the road for the vehicle carrying the women to pass and then rammed into them with deadly precision, according to the New York Times.

“It was the turning point of my life—the before and after my mother died,” says Clark.

“At only 18, having to make decisions about the funeral, finances, and everything else—it was really tough.

“Within a couple months, I moved to Las Vegas with friends,” he says. “I had received a sizeable chunk of money from the military and I basically spent it all on partying, drugs, and alcohol.

“My attitude was that this was blood money and I can’t keep it. The money was a terrible reminder of what had happened, so the sooner I got rid of it, the better.”

Clark says he lived on the edge for a couple years before waking up one morning to a sudden moment of clarity.

“I looked around and saw all these people passed out and bottles all over the floor,” he says. “There were dirty stinking dishes piled high and no food in the house. Everyone was strung out and making bad choices.

“I realized this is not what I want—this is not what my mom died for. I could be full of hatred toward terrorists and the Iraqi people or I could honor my mother’s memory by doing good to others and sharing something positive.”

Though the transition was rocky, Clark eventually earned his GED, an AA degree, and a bachelor’s degree from WSU Global Campus. Beyond his wildest dreams, he was then accepted into the WSU master’s in English program.

“The committee gave someone without the standard credentials a chance and it changed my life,” he says. “At first, I stood out like a sore thumb, but by the second year, I’d found my way thanks to some very supportive faculty.

“Today, my goal is to make a difference in someone’s life every day. Being a teacher gives me the most agency possible. I have the ability to shape youthful minds in a way that hopefully encourages them to be open, respectful, and value the ideas of other cultures as much as they value their own.”