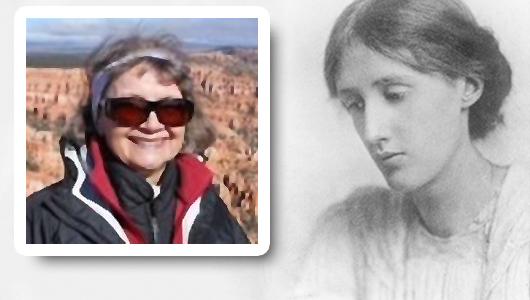 As the recipient of the 2019 Emeritus Society Legacy of Excellence award, Virginia Woolf scholar and professor emerita Diane Gillespie was honored for her sustained contributions to academia, continued service to the university and community, and personal accomplishments in retirement.

Her Legacy of Excellence lecture, titled “What’s Left to Say about Virginia Woolf?,” was part of WSU Showcase, the annual celebration of faculty, staff and student excellence.

In nominating Gillespie for the award, associate professor emeritus of English Alexander Hammond noted that Gillespie has remained a major voice in Virginia Woolf studies post-retirement.

“She is an internationally recognized scholar and editor of Virginia Woolf; of figures connected to Woolf’s Bloomsbury group; and of late 19th- and early 20th-century British literature and culture,” Hammond wrote. “Since her retirement in 2001 from the Department of English at WSU, Gillespie has made outstanding contributions to her academic fields, to Washington State University and its reputation, and to her community.”

Gillespie’s lecture provided a partial overview of her research and publication on Virginia Woolf, one of the most recognized writers of the modernist era and author of such books as “Mrs. Dalloway,” “A Room of One’s Own,” “To the Lighthouse” and “Orlando.”

Gillespie’s work focuses on two areas: 1) Virginia Woolf and the visual arts, especially the painting of her sister, Vanessa Bell, and 2) Virginia Woolf and the Woolfs’ personal library in WSU Manuscripts, Archives and Special Collections, especially unexpected publications by the Woolfs’ Hogarth Press. Gillespie’s work also addresses the Woolf “industry,” reasons why scholars have found so much to write about and why Woolf studies remain relevant today.

Gillespie will also be awarded the Emeritus Society Legacy of Excellence Award, which recognizes sustained contributions to academia, continued service to the university, community and mankind, and personal accomplishments in retirement that serve as an example for other retirees.