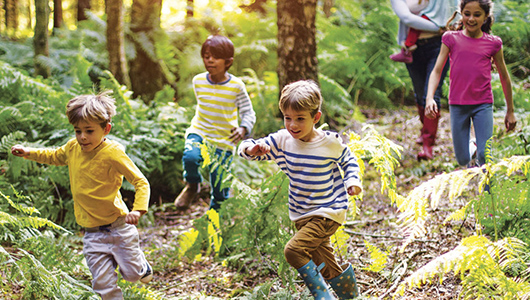 Biophilia, our innate affinity for and connection to nature, is not only for children—parents, too, are taking time from hectic schedules to unwind with meditative forest bathing, and many doctors now prescribe visits to the park instead of pills.

Getting kids outside is nothing new to Jeff Sanders, WSU associate professor and environmental historian. He says the idea of a nature deficit goes back at least 150 years to the Industrial Revolution, when many Americans left rural areas for work in Chicago or New York along with a large influx of immigrants. If the children weren’t helping in factories, they were often left to fend for themselves on the streets.

Fearing for the youth’s health as well as the future of our nation, social reformers advocated for changes that led to the playground movement of the late 1800s. Around the same time, summer camps reached their heyday, and the Boy Scouts of America was established. The first “streetcar suburbs” also took root, where people with means could escape grimy cities for more leafy areas like Brookline, Massachusetts.

Sanders says people today are still trying to escape cities for an idyllic respite in nature. “But, if we always focus on nature as being someplace else, we’ll keep befouling the places we live in,” he says. “Many historians are looking at it more like a garden—we should be tending to the places we actually live in, our backyard, cities, and streets—that’s all a part of nature.”

The contented little fellow playing in the vegetable garden at Into the Forest Preschool would certainly agree. Though a single frost-blackened sunflower now remains, the children had grown and eaten potatoes, carrots, tomatoes, and squash throughout the summer. For them, nature has become an integral part of their daily lives whether they’re digging in the sand box or rolling a big wooden spool under the open sky.

Unfortunately for many children, carefree days playing outside are a thing of the past, says WSU clinical assistant professor of human development Robby Cooper. Today, a child seen walking to the park alone might well trigger a call to police and a warning to parents.

Cooper says Richard Louv, author of Last Child In The Woods: Saving Our Children from Nature-Deficit Disorder, blames this phenomenon on an increasingly fear-based society. Although statistics show crimes against children have dropped to their lowest rates ever, social media and 24-hour news cycles can make it feel like every abduction is happening in our backyards.

So now, instead of exploring, making up games, or riding bikes to local parks, kids spend much of their free time indoors using tech devices and staring at screens.

Cooper says all this screen time may affect attention span and leaves little room for imagination and creativity, things research suggests are important for brain development and learning.

“As a teacher, it’s a challenge now to get people to slow down and notice things,” he says. “To be ok with uncertainty and flexible in their thinking.”

Read the full “Inside Outside” story in the Washington State Magazine.

Top image: Group of children at summer camp running through a woodland area with their guide/teacher walking behind them. (Solstock, via Washington State Magazine.)