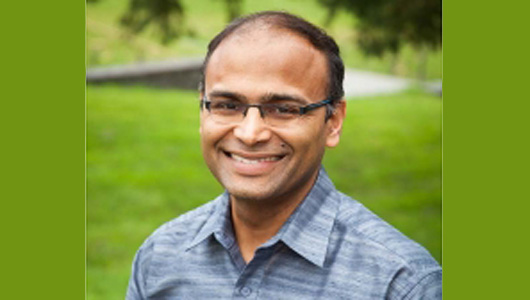 Bala Krishnamoorthy, associate professor and program leader for mathematics and statistics at WSU Vancouver, has been selected to receive the 2019 Chancellor’s Award for Research Excellence. The award recognizes exemplary and influential work by a WSU Vancouver faculty member.

Krishnamoorthy discovers ways people can use data strategically to make better decisions. His research interests include computational algebraic topology, geometric measure theory, integer optimization and basis reduction, computational models for surgical and biomedical applications, and computational biology. His research contributes directly to the goals that are part of WSU’s Drive to 25.

A proponent of interdisciplinary research, Krishnamoorthy has been working with orthopedic surgeons from Oregon Health & Science University, employing data analytics techniques to find insights in their data. One finding was that bone grafts from older donors may be just as strong as those from younger donors, vastly increasing the pool of potential donors. He has worked with collaborators in the field of criminal justice to apply topological data analysis to study police body camera video datasets.

Krishnamoorthy was instrumental in establishing the mathematics graduate program at WSU Vancouver and has taken the lead in recruiting students and creating opportunities for them. He posts all his lecture videos online with open access, and they are followed by students and researchers from all over the world.

He has received funding worth millions of dollars from the National Science Foundation and the Department of Energy. A leader in his field, he has organized several conferences and special sessions at national and international meetings and is frequently invited to present seminars at other universities and national meetings. He has published widely and serves on the editorial board of the Journal of Advances in Applied and Computational Mathematics.

Krishnamoorthy joined WSU Pullman in 2004 and transitioned to the Vancouver campus in 2014. He received his bachelor’s degree from the Indian Institute of Technology, Madras, and his Ph.D. from the University of North Carolina at Chapel Hill.

As one of six campuses of the Washington State University system, WSU Vancouver offers big-school resources in a small-school environment. The university provides affordable, high-quality baccalaureate- and graduate-level education to benefit the people and communities it serves. As the only four-year research university in Southwest Washington, WSU Vancouver helps drive economic growth through relationships with local businesses and industries, schools and nonprofit organizations.