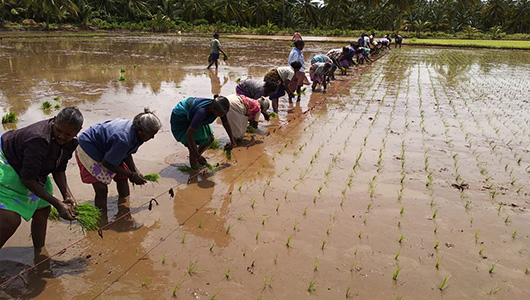 Deepti Singh, assistant professor in the School of the Environment, is trying to understand how and why the South Asian summer monsoon is changing.

Weather patterns in the region are becoming harder to predict, with rain falling in unusual amounts and locations, putting billions of lives and livelihoods at risk.

Working with colleagues in the U.S. and India, Singh has authored a new review exploring the state of knowledge on how the monsoon is changing and the role humans are playing in the phenomena.

For more than 2 billion people, the monsoon rains are a matter of life and death. People in India, Bangladesh, Pakistan and neighboring countries depend on the warm, moisture-laden monsoon winds to water their crops and refill rivers and wells. Too little rain means harvests may fail, affecting food prices worldwide. Too much, and millions face the risk of flooding, creating humanitarian disasters on an international scale.

The article looks at how changing weather patterns are affected by natural climate variations, atmospheric pollution from the region’s rapidly growing economy, and a landscape dramatically changed by agricultural intensification.

By helping create more accurate models of climate change and a better understanding of how human activities affect weather and climate, Singh’s research not only safeguards millions of people in Asia, it will help protect U.S. breadbaskets, including Washington state.

“Better predictions and projections provide information that people need to plan for and manage the disasters that follow extreme weather events, whether they happen in Asia or the U.S.,” Singh said. “Improved predictions of the monsoon, especially its sub-seasonal extremes, could help save lives and reduce their impacts on South Asia’s population, agriculture and the economy.”

With collaborators Subimal Ghosh of the Indian Institute of Technology Bombay in Mumbai, Mathew Roxy of NOAA’s Pacific Marine Environmental Laboratory, and Sonali McDermid of New York University, Singh reviewed historical changes and variability in monsoon rainfall, extreme weather events, and the impact of human activities, such as the conversion of forest to farmland, increased emission of anthropogenic aerosol particles from fossil fuel and biomass burning, and increased global greenhouse gas emissions.

The scientists also offer insights for climate and weather scientists to better predict and prepare for a changing, unpredictable monsoon.

The summer monsoon occurs between June and September and brings warm, moist air and torrential rains to countries in South Asia.

Delays in the monsoon and reduction in the amount of monsoon rains can severely lower cereal crop yields and water resources that millions depend on for their livelihood. Heavy rain can bring floods that devastate the economy and have killed roughly 50,000 people in India over the last 40 years.

Scientists believe the summer monsoon has changed over the past several decades as a result of simultaneous rapid transformations in farming, intensification of agriculture through irrigation, increasing concentrations of human-caused aerosol emissions, rising greenhouse gases, and a warmer Indian Ocean shifting the way monsoon rains and winds circle through the region. Human-caused changes to the land and the atmosphere’s composition have been particularly acute over South Asia.

In their paper, Singh and her colleagues reviewed current models and historic data. They found a long-term weakening of monsoon circulation, a decline in seasonal rainfall over the core of the region, but an increase in other areas.

Noticing changes in the frequency, intensity, and duration of extreme weather, such as wet and dry spells, scientists found an increase in heavy rainstorms across central India, and more intense rainfall across much of the country, as well as fewer dry spells and more intense wet spells over the western and northwest parts of India. Taken together, changes like these spell uncertainty and risk for farmers and residents of South Asia.

The scientists call for an improved network of land and ocean-based measurements and improvements in climate models to represent the many ways that climate systems are being affected by human activities.

For example, Singh says there is a particular need to model land-surface conditions associated with irrigation, an important factor that influences the monsoon but is not represented in most global climate models.

Understanding what is driving these changes will help scientists better predict and plan for the monsoons of the future. The potential impacts, from flooding to drought and crop losses, on billions of lives underline the urgency of that knowledge, says Singh.