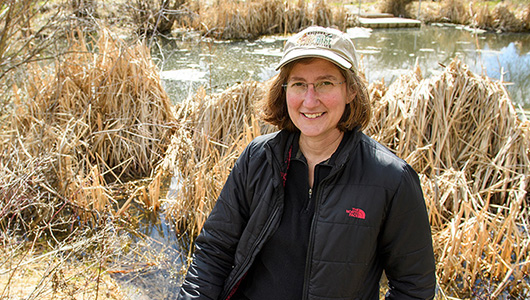 Those few strands of code say a lot to Goldberg, a WSU scientist who studies environmental DNA, or eDNA—genetic material sampled from soil or water rather than directly from an organism. The samples not only identify the animals who live in this pond, they hold the potential to tell scientists much more—secrets that can help find and protect some of our rarest, threatened wild species and allow wildlife and people to more easily coexist.

This spring, Goldberg and a team of researchers at WSU and partner institutions are launching new research aimed at expanding eDNA’s potential. Supported by a $1.4 million grant from the U.S. Department of Defense, the team is developing new eDNA techniques to reveal and understand endangered amphibians on military bases across the nation.

As predators of pest insects, and as prey themselves for other wildlife, amphibians keep our environment in balance. Compounds in their skin could hold the key for future cures for cancer and bacterial infection. However, with roughly a third of the world’s amphibian species under threat of extinction, many of these animals are becoming hard to find.

“I’ve spent a lot of time looking for amphibians in places I was sure they were, but just couldn’t find them,” said Goldberg.

An assistant professor in WSU’s School of the Environment, Goldberg studies better ways to manage and monitor aquatic animals. As a doctoral student, she was drawn early to the emerging field of eDNA, learning how to detect animals by the genetic traces they leave behind.

“Too often, searching for rare amphibians means that you’re turning over rocks and other parts of their habitat to look for them,” she said. “Although we move those rocks and plants back where they were, you never quite recreate that microhabitat. Using eDNA is a way to find rare species without destroying their homes.”

For their new project, Goldberg and her team are developing improved eDNA tests and techniques in order to study and save some of the last remaining populations of rare amphibians like the Chiricahua leopard frog of Arizona, or the flatwoods salamander of the Florida panhandle.

Its tiny silvery body speckled with black, the flatwoods salamander once slithered through wetlands across the American South. But farming, development and fire suppression ate away at its habitat. Today, the remnant population mostly survives on Florida’s half-million-acre Eglin Air Force Base, nearly half of which is native longleaf pine forest.

Flatwoods salamanders are tough little survivors in a very challenging ecosystem. Adult salamanders lay their eggs every fall, when the pine forest’s wetlands are dry. When pools fill up over the winter, those eggs hatch and become larvae—similar to their tadpole frog and toad cousins, but with more body and less tail.

Thanks to the pine forest’s litter of needles, “these are highly acidic ecosystems,” Goldberg said. DNA doesn’t last long amid the acidic pools. Goldberg’s team aims to find a way to get better data from such low-quality samples.

Currently, scientists can use eDNA from mitochondria—tiny, energy-producing organs found inside living cells—to learn whether a species is present. Much more plentiful than nuclear DNA, the genetic code in the cell’s nucleus, mitochondrial eDNA is unique: “It’s like a bar code for different species,” says Gleason.

Using mitochondrial samples, DNA can give a yes or no answer to the question of presence. Goldberg’s team wants it to do more.

“One of our biggest questions is, ‘How many salamanders do we have here?’” Goldberg said. Nuclear DNA could tell them that, and more.

Just across the Idaho border from WSU’s Pullman campus, Goldberg and her students have been testing better filters.

“DNA degrades within minutes, so you have to get it filtered and preserved right away,” said Goldberg.

Back in the lab, they’ll extract the eDNA for experiments to determine age structure—how many are adults, versus eggs or larvae—revealing whether a local population is healthy or on the decline.

Once perfected, such discoveries could give Elgin AFB personnel a clearer picture of the location, population size and health of the salamanders on their base, helping them preserve important habitat and use their base’s land more efficiently.

Frogs and salamanders aren’t just interesting animals, says Goldberg. They help keep pests in check and our ecosystem in balance.

The decision to help them, she adds, “comes down to what we care about as a society: Do we value the uniqueness and diversity of these species?

“Without intervention, some of these species are in a lot of trouble,” said Goldberg. “With help from our partners at the Department of Defense, we’re developing better eDNA techniques to understand them and make sure they stay around.”